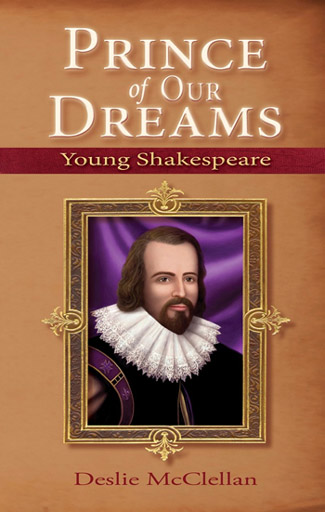 A Book Review of the novel on the intertwining lives of the youthful Francis Bacon and William Shakespeare.

There has been a vast conspiracy for over 100 years, starting with Mark Twain, Ignatius Donnelly, Alfred Dodd, Dr. Orville Owens and others. It's continued at a casual pace until recent times. Now it threatens to explode like a comet on the horizon thanks to the investigative powers of people and websites like Peter Dawkins, Virginia Fellows, Mather Walker, Sirbacon.org —and now the innovative and wonderfully descriptive writing of Deslie McClellan. It's time once and for all for the mask to come off the hidden player in a masque so grand that it's like has never been seen before or since.

I don't know if the author actually lived in the Elizabethan era or myself for that matter, but I do know this, I felt like I was transported there by the artful use of language that Will Shakespeare would undoubtedly be proud of. Have you ever sat through a Shakespeare play and for whatever reason, missed a line and wondered what the actor just said? Somehow Ms. McClellan incorporated the delicate balance of capturing the language of the time while making it eminently understandble. The famous salons of France come to life as the repartee and wit of some of the brightest minds on the continent are on display with such deftness that you are caught up in the joie de vivre of the moment. Her descriptive powers are equally impressive. I wonder if she has not scoured the countryside of England , France and Italy because her depictions of plants, flowers, birds, landscapes and buildings are captivating, at once both beautiful and realistic.

There are many things we don't know about Francis Bacon, afterall he did live about 400 years ago. On top of that, there's the secret life of Bacon that he purposely kept hidden. But he left clues for us in the form of several types of ciphers. And listen up—Da Vinci code schmincy code—I'm talking about real codes and ciphers. Some of these codes are beyond the intellictual understanding of many so-called scholars. The self-imposed blocks prevent them from seeing the truth. One of the reasons Bacon imbedded his true story is because he had a crazy, vindictive mother; which brings me to my favorite scene in the book. We know this happened from the ciphers but not exactly how it went down. It is left to the novelist to flesh out the details.

Thanks to the ever malicious Robert Cecil, a young and very beautiful lady-in-waiting is tricked into revealing Francis's true mother, the queen. Hearing this the "Virgin Queen" flies into a rage beating the poor hapless girl who later dies of her wounds. Then she turns on her own son who defended the girl just moments before:

All eyes were on Francis, who remained bewildered and uncomprehending of the tortured words of the now unconscious Lady Scales.
In a passion of rage, the royal parent loomed over him.
"Aye, she named you, Francis Bacon. You! Know then that you are my own son, the fruit of a union with—nay, I'll not betray his name, but a union lustful, lascivious, and secret, that men only guess at." Her words stabbed with malice. "Let that be your glory and your shame! Blood of my blood, flesh of my flesh. But you, though truly royal, shall rule not England or your mother, nor reign o'er subjects yet to be. I am they mother! But I curse thy nativity and bar you from succession forevermore."
With a prideful and gloating hatred she turned to the circle of watchers and spoke to them as much as to Francis.
"Let all be witness: I bar from scepter and throne my first-born. For it seems to become him better to uplift maids who tattle than to lift hand in aid of her who brought him forth." She looked back at the still kneeling Francis. "Base-born thou art! Bastard conceived in lust." Her taunt intended to inflict deep and lasting pain. "And now, what will this brave boy do? Tell a-b-c's?"
The room was spinning. The world was spinning. The Queen leaned over him, jabbing her finger into his shoulder:
"These are but the beginnings of evils. Well may ye hope for a merry day..."

She had left him and was moving swiftly out of the room, Cecil close upon her heels, like an eager lapdog.
As through a mist he saw her pause and turn at the door.
"Know, all of you, that it's death to speak a word of what has passed—aye, torture and death." ... p. 179.

The whole scene vibrates with realism. The tension is palpable. Particularly touching is the aftermath, when his foster mother Lady Anne consoles Francis, helping him to cope with the situation. Meanwhile, the queen decides to cover-up the whole affair by sending the 15 year-old Francis off to France for several years.

Nearly the entire second half of the novel takes place in France. Even less is known about Bacon's experiences there. But once again through ciphers and also sonnets and the Shakespearean plays, a picture emerges. He falls in love with an enchantress, one of the great beauties of not only France but of Europe, Princess Marguerite, the king's 25 year-old sister. Here the novelist has a choice to make. Does the young but mature beyond his age Francis eventually consummate his love for the married Princess or not? And would the noble young bard/prince act on such an impulse? Personally, I would have gone in another direction. I would have taken my clue from the romanitic and high ideals obviously embodied in Bacon.

As for the princess, I defer to Alfred Dodd in Francis Bacon's Personal Life Story on the character and disposition of Magaret.

From her birth in 1553, she had breathed a vitiated moral atmosphere, but there is no clear evidence that Marguerite of Navarre ever committed herself sexually in spite of her open indescretions. Historians and biographers are at variance. Writers who take a low view of her character are counterbalanced by others who warm in their praises as to her virtue. We do not yet know the truth and we must reserve our judgement.

"Never have more contradictory judgements been passed on the same woman. In the camp of the Defence, all the great poets of the Renaissance from Ronsard to Desportes have chanted her praises; Brantome has extolled her to the skies; the three brothers d'Urfe and Loys Papon are her passionate admirers; de Coste . . . has made of her a victim and a saint. Bassompierre has energetically defended her against Dupeix, "that dog which bit the hand that fed him."" (Life of M. N., Mme la Ferriere)

Literature, music, and art ran in her blood, for the first Marguerite, her ancestress (she was the third Marguerite) was a poetess and the creator of the Heptaméron, a collection of Tales. Marguerite of Navarre was brilliantly clever with almost a touch of genius. She possessed high literary gifts and a wide range of knowledge. She was also a superb conversationalist. ...

Her beauty of mind and intellectual gifts were apparently only equalled by her physical charms ... pp. 86, 87.

Obviously, a suitable match for Bacon and perhaps more so since there was talk of a divorce. But as Dodd says, the verdict is out on her moral convictions. We do know that Francis was completely enamored with her from his poems and other writings. His Romeo and Juliet explored the depths of their love. Just as in the play, families stood in their way. In his case it was an immovable object, his mother. She refused the alliance. I can understand why the author chose the storyline of a brief affair, after all, is not Romeo and Juliet one of the greatest love stories ever told? In my mind it will always be a platonic affair for he was still rather young and above all else, an idealist.

There is just enough ribald behavior to satisfy the modern reader. There's even an exciting swashbuckling scene to quench the thirst for adventure. So forgive the poetic license a novelist has to make when limited information is available and enjoy a remarkble book that elevates the Bacon/Shakespeare controversy to new levels.

You can buy Prince of Our Dreams here:

Some other books for further reading: