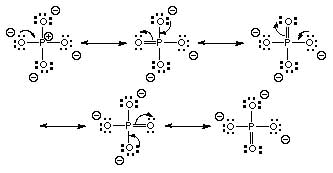 Phosphorous is a third-row element, so it can expand its octet to contain ten valence electrons. (Phosphorus is the only atom commonly encountered in organic chemistry that routinely expands its octet to ten valence electrons.) The oxygen atoms can each loan a lone pair to the phosphorus, so several resonance structures result. The resonance of phosphate ion has important biochemical consequences. ucla, Copyright 2000, Steven A. Hardinger and Harcourt Brace & Company. All rights reserved 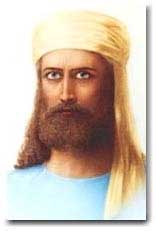 Editor, Reverse Spins: These quotes were given to Nicholas and Helena Roerich by El Morya in the 20's and early 30's. El Morya who ascended in the late 1800's, is one of the founders of Theosophy as well as Agni Yoga. He then went on to cofound The Bridge to Freedom and then the Summit Lighthouse with Saint Germain. Nicholas Roerich, a Russian, spent many years in Tibet. He was truly a Renaissance man. His paintings are very original and have a special ethereal quality. He had a student in FDR's Cabinet. The book Leaves of Morya's Garden by Roerich was even on Elvis Presley's reading list. El Morya has written and dictated on almost every subject imaginable over the years—always with the goal of elevating mankind and bringing in a New Era. Here are his thoughts on phosphorous.

White phosphorus, P4, consists of four phosphorus atoms arranged at the vertices of a tetrahedron. slb.com

One should guard fire as a treasure. The phosphorous of the nerves can be consumed like a wick; is a lamp fit without it? One could add the "oil" of ozone, but with no wick, the fire cannot be kindled. Agni Yoga (1929) - 369

A phosphorous web has a complete resemblance to the fiery body. Ignite such a web and you will see how the flame flashes up in many directions simultaneously. So does the fiery body flare up when ignited by irritation or shock. Heart (1932) - 414

Someone may inquire about the issuing of a second volume of Heart. Answer that people like to read only the last page, without caring about the significance of the first page. Hence the Teaching must be separated into steps. It is especially sad to see how the senseless gulping down of the last page only brings harm. The heart demands care and coordination, otherwise the igniting of the phosphorous web will occur. Heart (1932) - 415

It is correct to understand the eagle in the old writings as oxygen. Phosphorus, sulfuric zinc, and platinum are also often encountered as symbols in the old formulas. Agni Yoga (1929) - 358

Only recently has the study of the somatic structure of the organism begun. Recently, also, the purple protective auric net has become known. Both phenomena are related to the domain of Fire. The first is a result of the work of phosphorus. The second represents the power of fire, which is attracted from space by the healthy emanations of the bodily organism. Thus, one should safeguard the fire of the body, so that its effect may be powerful. Our medicines are intended to strengthen these fires. It is not the muscles, but the fiery wave of nerves that requires attention. It must be restored and nurtured. Agni Yoga (1929) - 371

A multitude of circumstances must be examined. If people who have achieved the kindling of the inner fire would write down their observations about it, they would greatly help many beginners. The common work for humanity requires first of all the protection of individuality. And when all the many ways of kindling the inner fire have been found, the simplest way proves to be the quickest. It is astonishing to see what supposedly insignificant circumstances can help to ignite the flame. One such, which is always present, is a sensitivity to shocks. A straight position of the spine is also of great importance in this. But in the case of chronic curvature of the spine, musk can be used to help ignite the flame. The absorption of musk interacts with phosphorus, which restores the impeded flow of fire. Agni Yoga (1929) - 413

What is the relation between physical musk and the phosphorus of spirit? Musk is also the product of fire, but of an unconscious fire. Yet, even the crystal produced by unconscious fire contains the treasure. Agni Yoga (1929) - 423

It is wrong for people not to pay attention to the effects of eating during irritation and agitation. Very strong poisons are formed by this unwise procedure. Many days must pass before this poison will dissolve. It should be remembered that hunger is far better than harmful food. During irritation and excitement I advise milk in all forms as a customary antidote. Soda strengthens the action of milk. The ability to recognize disquietude is already a considerable step toward the education of the heart. If disquietude occurs, one should be able to nullify it; but often disquietude is confused with fatigue, then let us not overlook musk or certain varieties of phosphorus, the substance that is called sperm oil, and cod-liver oil and fresh kumiss which are popular among northern people. Also, you remember to what an extent the Teacher sends rays at night, but even these rays act far more powerfully when they are recognized. The silence of the ancients during the meal had a sacred significance. But the understanding of sacredness also comprised the cure. Thus, the heart and nerves can often be strengthened by a rational partaking of food. We are not Luculluses, but each vital function must be rational. Many workers have poisoned themselves. Moreover, the Chinese sometimes fed the enemy with the liver of an irritated rooster - thus resourceful are human wiles. But in the New World everything must be directed to good. Heart (1932) - 534

Hygiene of thought must be applied on both the spiritual and earthly planes. One must carry out experiments, strengthened by fiery medicines, upon the processes of thinking. One should pay attention to the action of phosphorus or the evaporation of eucalyptus upon thinking. One should verify the extent to which thinking is improved by musk. One should gather all data in regard to various resinous oils. Finally, one must remember all the combinations that are closest to the activity of Fire. These experiments should be carried out with persons of strong fiery thinking. Such experiments will remind one not only about vitamins but also about Agni. The efforts of physicians to concentrate not only upon internal remedies but also on the reactions of the sense of smell will produce the needed results. People are gravely sick. The dark forces endeavor to seduce with all kinds of narcotics, but the narrow boundaries of life are not broadened by stupefying the intellect. Just now spiritual vigilance is needed. One must grow to love this vigilance as a state fitting to man. Fiery World - Book 1 (1933) - 350

The Fiery World has its expression under the name of psychic energy. Thus will people understand more readily. Everyone will agree that there exists within him something for which there is no name in any language. Force or energy will be more readily accepted than a fiery spark. Humanity is highly opposed to Fire. Fire consumes but does not create - so people think. Therefore, at first, name it psychic energy, and only to a developed consciousness speak about Fire. It is more acceptable to say that musk, phosphorus, or amber are close to psychic energy than to say they are close to Fire. The first consideration, in everything, is not to create impediments. Fiery World - Book 3 (1935) - 440

Urusvati knows that the healing flame can easily be brought into the darkness of the astral world. The subtle body is like a chalice filled with phosphorus. It can be an inexhaustible source of light and beneficial rhythm. Supermundane - The Inner Life - Book 2 (1938) - 386

If you are ever in New York I strongly recommend a trip to: Nicholas Roerich Museum, 319 West 107th Street; NY, NY

Back to: El Morya on Esoteric Healing and Cancer