Editor, Reverse Spins: These quotes were given to Nicholas and Helena Roerich by El Morya in the 20's and early 30's. El Morya who ascended in the late 1800's, is one of the founders of Theosophy as well as Agni Yoga. He then went on to cofound The Bridge to Freedom and then the Summit Lighthouse with Saint Germain. Nicholas Roerich, a Russian, spent many years in Tibet. He was truly a Renaissance man. His paintings are very original and have a special ethereal quality. He had a student in FDR's Cabinet. The book Leaves of Morya's Garden by Roerich was even on Elvis Presley's reading list. El Morya has written and dictated on almost every subject imaginable over the years—always with the goal of elevating mankind and bringing in a New Era. Here are his thoughts on the 'mythical' Shangri-la: Shambhala and its Ruler.

One is obliged to encounter people who ridicule each word unintelligible to them. Their receptive apparatus is covered with callouses of ignorance. For example, if to them is said - "Shambhala," they will take this concept of reality to be a fetish - superstition. What are the signs of the time of Shambhala? The signs of the age of truth and cooperation. Trace how the word Shambhala is uttered in the East. Try to penetrate, even in a small way, into the ideology of this concept. Try to understand the rhythm of structure of speech about Shambhala, and you will perceive a great reality which causes the harp-strings of humanity to vibrate. Let reason help you to ponder on the values accumulated by the best strivings. In the book "Community" the concept of Shambhala cannot be omitted.New Era Community (1926) - 242.

I, Ruler of Shambhala say, "The principle of life is the affirmation of the expanse of cosmic energy and the way of creative Fire!" Hierarchy (1931) - 6.

What is the treasure of the heart? Not only benevolence, not only compassion, not only devotion to the Hierarchy but consonance with the Cosmic Consciousness when the heart, besides its own rhythm, even partakes in the cosmic rhythm. Such a heart can be trusted; it possesses straight-knowledge, it feels and knows, and as a manifested link with the Higher World it expresses the indisputable. The manifestation of the treasure of the heart is also very important for the formation of the subtle body. Try to imagine how important is the experiment with the subtle body. The densifying of the subtle body can give that of which the Teaching of Shambhala so sacredly speaks. One may have an unconquerable host, one may have irreplaceable co-workers, true, only temporary ones, but beyond the conditions of corporeal life. Hierarchy (1931) - 106.

The concept of Shambhala is actually linked inseparably with fiery manifestations. Without the application of purified Fire it is impossible to approach the higher concepts. Throughout the entire world people are divided into those who are conscious of Shambhala as the Highest Measure and those who deny the future. Let the word Shambhala be known to but a few; each has a different tongue, but the heart is one. One must manifest solicitous attention to each one who is ready to proceed toward Light. The heart must embrace each manifestation that reverberates to the Good. But only under the Flaming Dome are all equal. Fiery World - Book 1 (1933) - 41.

Shambhala is manifested under the most varying Aspects, in relation to the concepts of a century. It is correct to study all the cycles of the legends of Asia. Thus one can go back as far as the most ancient Teachings connected with Siberia, as the least known and most archaic part of the continent. Fiery World - Book 1 (1933) - 97.

With what, then, is the Heart of the Arhat fed? We say - with love. Only this Source knows how to saturate the fiery heart. The great Mother of the World knows this Source. Each pure heart knows this Source. How, then, are the hearts commerged? We say - with love, that powerful source which converts life into a manifestation of beauty, that source which contains all the subtle energies of the heart. The Heart of the Arhat is a secret stronghold, which guards the sacred gift of the Cosmos. And not outside of life but in the very depths of life is forged the Heart of the Arhat. Let us say, by love. Yes, yes, yes, thus saith the Lord of Shambhala. Fiery World - Book 3 (1935) - 171.

What heart, then, has taken up the enormous Burden? The all-encompassing Heart which knows the Cosmic Burden. Who, then, bears the load of the ages? The One Heart which knows the manifestation of Infinity. Who, then, strives in fiery achievement? The one Heart which knows Cosmic Right. Verily, thus is the World saturated by the One Heart. Humanity suffers more from the spirit than from matter, and only when the spirit adheres to the law of Cosmic Right will humanity overcome its spiritual infirmities. The planet has lost sight of its great and pure destination. Matter has been so steeped in density that it must be refined. When the great Tidings of the Unified Heart will saturate the spirit with pure striving, then will life be truly transformed. Who, then, will give to the World the Tidings about fiery Unity? We say - the all-encompassing Heart, the Heart manifested by eternal Fire - yes, yes, yes! That which has been put together by Cosmic Right and by strong aspiration of the will is immutable law. That which is from the Cosmos will dwell with the Beauty of the Cosmos - thus saith the Lord of Shambhala. Fiery World - Book 3 (1935) - 178. 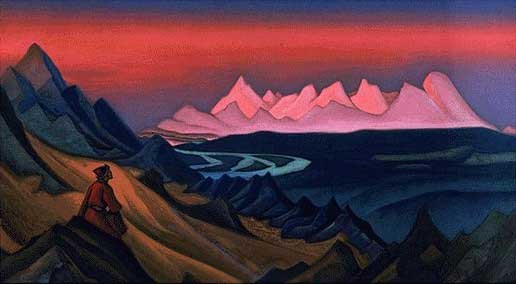 In the East people thought about a Northern Shambhala, which manifested as the aurora borealis. There also existed a legend that a banner would be set up at the point of the North Pole. Thus are traditions fulfilled; and one may glance into the distant future when, through a shifting of the terrestrial axis, new lands will be discovered which are now concealed. I have already spoken about the uncovering of the tundras. I commend those who look into the future. Brotherhood (1937) - 509.

Lamas speak about the Abode of the Great Rishis. Each one describes Shambhala according to his own understanding. The mention of treasures is correct, but they are described in different ways. Legends about Our Warriors exist all over the world and are not without foundation. There are also described many gates and mirrors. The legend about the Tashi Lama granting passports to Shambhala is symbolic. The appearance of similar symbols in various parts of the world proves how much Truth has spread. Even ancient Mexico knew about the Sacred Mountain where the Chosen People live. It is not surprising that all Asian nations preserve legends about the Sacred Mountain. It is described almost correctly, but he who is not called will not reach it. Supermundane - The Inner Life - Book 1 (1938) - 16.

You have noticed that people always place the location of Shambhala to the North. Even among the Eskimos and the Kamchatkans there exist legends about a wondrous country beyond the land of the midnight sun. The reasons for this displacement are varied. Some wanted to conceal the location of Our Abode. Some wanted to avoid the responsibility of confronting a difficult idea. Some think of their neighbors to the North as being especially fortunate. In reality it seems that all nations know about the Forbidden Country but consider themselves unworthy to have it within their boundaries! Supermundane - The Inner Life - Book 1 (1938) - 51.

People are perplexed about the far-off worlds, but they misunderstand much on Earth as well. For example, it is believed by many that Panchen Rimpoche issues passports to Shambhala. It would seem that this makes no sense, but actually these papers are not to Shambhala, they are about Shambhala. From ancient times there has existed a reminder about Shambhala that was given to those who were able to direct their thoughts to it, but later the sense was distorted and some ridiculous passports have been seen. Also, many do not understand why some seemingly ignorant lamas can be guardians of Our Brotherhood. One must recognize that these lamas are exceptional; they have preserved the concept of Shambhala as a sacred treasure. Supermundane - The Inner Life - Book 1 (1938) - 69.

Urusvati is right to be indignant at all the falsehoods that are written about Us. Truly, if all the idle stories were gathered into one book, an unusual collection of falsehoods would result. Symbolic expressions, created over centuries, have been transformed into unbelievable fairy tales about treasures that are guarded by the Lords of Shambhala. In the elaborate Tibetan narratives it is hard to understand how the more fanciful exaggerations have accumulated. Through these exaggerations the Tibetan nation wished to enhance its position as a world focus. For example, it is written that the warriors of Shambhala are innumerable and invincible, and their leader defeats all evil and affirms the Kingdom of Good. Such is the belief in the East, which cherishes in its heart the legend about the victory of Light. For the East, each veiled word written for the glory of Light is justified, but the West thinks the opposite and wishes to unveil everything, even to the point of belittlement. Supermundane - The Inner Life - Book 1 (1938) - 70.

Some people may be interested to know more about the whereabouts of the Stone. The place where it was first revealed became the foundation of Shambhala, and it intensified the chemical significance of the Abode. Many stories could be told about this messenger from the far-off worlds. You already know about certain guardians who have particles of this Stone, and you can confirm how the Stone reveals itself. You will be astonished to know how many different countries and heroes are connected with it, and how many great deeds were inspired by the legends pertaining to it. Supermundane - The Inner Life - Book 1 (1938) - 134.

In the literature of various nations one can find puzzling indications. For example, Shambhala is said to be located in the extreme North, and the northern lights would seem to confirm this. But let us not forget that similar electrical discharges can also be observed in the Himalayas. Supermundane - The Inner Life - Book 1 (1938) - 216.

If you are ever in New York I strongly recommend a trip to the: Nicholas Roerich Museum, 319 West 107th Street; NY, NY.

More on Shambhala (including its building and present location) here: Soul Travel, Soul Mates and Faeries, an Atlantean and Lemurian Tale

back to: Tibet Page