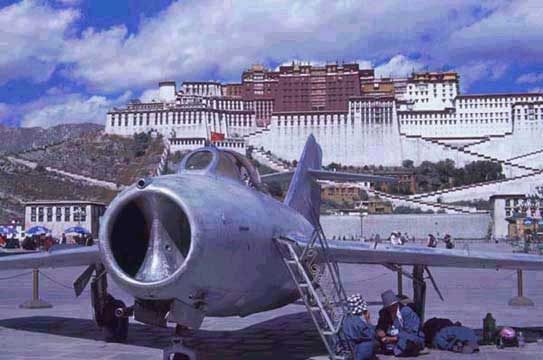 The Globe and Mail,

SHIGATSE, TIBET -- In the centuries-old monastery of the revered Panchen Lama, the Tibetan monks sit in their maroon robes beneath a glossy new poster of the modern Communist trinity: Mao Tsetung, Deng Xiaoping and Jiang Zemin.


Nearby, at the doorway to the Panchen Lama's ancient throne, a painted sign is emblazoned with a slogan by Mr. Jiang, urging the Tibetans to "Protect the Country" -- the Chinese motherland. A framed copy of a "patriotic covenant" declares that the Buddhist monastery is loyal to China and the Communist Party.


More of the Chinese President's ideological slogans are plastered inside the spectacular Potala Palace in Lhasa, traditional home of the Dalai Lama, the exiled Tibetan spiritual leader. Tour guides call attention to a massive new wall hanging, donated by Chinese military veterans. Chinese guards and soldiers are posted throughout the palace, while the Dalai Lama's living quarters are identified merely as the site where he once met a Chinese vice-premier.


China leaves no doubt about its complete control of Tibet's sacred religious sites. Its territorial markings are everywhere. But even as it tightens its grip on the monasteries and palaces, Beijing has gained enough confidence to adopt a softer long-term strategy for winning the hearts and minds of the Tibetan people.


The new strategy is based on economic influence, financial inducements, ethnic migration and political re-education, combined with a relentless policy of military control and police surveillance. And while many Tibetans still resent the 52-year-old Chinese military occupation, the new strategy is slowly succeeding in dampening the mutinous spirit of the 2.5 million people on the roof of the world.


Most of Tibet's monks have abandoned their old practice of approaching foreigners to ask for photos of the Dalai Lama. A few still hoard their personal portraits of the Dalai Lama, but their public protests have virtually ended. The number of Tibetan political prisoners has declined steadily in recent years, as fewer monks and nuns are willing to risk their freedom for protests that seem futile.


"Most average Tibetans wish that the Dalai Lama would return to be our leader," said a 28-year-old Lhasa man. "We dream of this. But it isn't safe to talk about it. People are afraid of saying a wrong word."


Beijing, meanwhile, is buying support by sending a massive flood of government money into this impoverished region. It has allocated 90 billion yuan (more than $16-billion) for the Tibetan region from 2001 to 2005, an increase of 50 per cent over the entire amount it spent here in the previous half-century. Beijing is paying for 90 per cent of Tibet's annual operating costs, along with massive projects such as a $4-billion railway from Tibet to mainland China. Communist officials claim they have propelled Tibet into a "golden era" of stability and economic progress. The boast is exaggerated -- Tibet is still one of the poorest regions of China -- but the economy is indeed booming.


In the struggle for the soul of Tibet, the Chinese understand that time is on their side. Massive migration by ethnic Han Chinese is changing the face of Lhasa, making Chinese the main language of government and business here. Tibetan teenagers say they are still Buddhists, but they rarely have time to go to the temples. They admit they know much less about the Dalai Lama and the Panchen Lama than their parents did. China's pop culture, its television, movies and music, is becoming increasingly dominant here. In the nightclubs of Lhasa, the Tibetans often sing in the Chinese language -- because it is "more fashionable," one clubgoer says.


Analysts believe Beijing has simply decided to wait for this cultural and economic integration to take its course. When the 67-year-old Dalai Lama dies, it will be relatively easy for Beijing to proclaim its own puppet leader to replace him. Combined with this strategy is the maintenance of China's long-standing policy of strict military control and surveillance over the Tibetan people.


The region is still heavily militarized. Security agents and spies are scattered throughout the monasteries and temples. As many as 200,000 troops from the People's Liberation Army are stationed permanently in Tibet. Military units often march down the streets of Tibet's cities, singing martial songs, with machine guns slung over their shoulders.


Political-education classes, too, have been instituted at every level of Tibetan society: in the schools, the monasteries and the prisons. "Our first duty is religious activity, but if there are instructions from the state, of course we should do everything that the state says," explained Punlak, a senior monk at the Panchen Lama's monastery in Shigatse.


A strict quota of 46,000 monks has been imposed on Tibet (compared with about 150,000 before the Chinese occupation), and the limit has remained fixed for many years. "We think 46,000 is about the right number," one official said. "It's enough to meet the spiritual needs of Tibet. Even if Tibetan parents are religious, it is quite normal for their children not to be religious." There is some evidence that the Chinese strategy is working.

Most Tibetans are unwilling to discuss the Dalai Lama, even privately. Nervous shopkeepers often evict foreigners from their shops if they ask any political questions. Protests also seem to be declining. A decade ago, at least 10 or 15 new political prisoners were put behind bars every year at Drapchi prison, the most notorious jail in Tibet.


But only two new political prisoners entered the jail last year, and none have entered so far this year, according to Drapchi administrators. (Tibetan exile groups acknowledge that the number of political prisoners is declining.) But even if the anti-Beijing protests are becoming more muted, many Tibetans remain unhappy with Chinese control. "Life in Tibet today is like having very bad karma," said a 24-year-old Lhasa man.


"We have the feeling that we don't have our own country. We belong to nobody. I'm very sad about the situation, but I can't do anything about it."