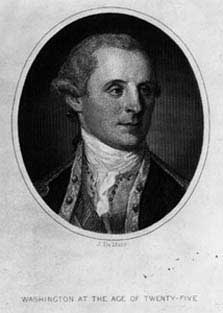 A Prophecy Written in the Year of Washington's Birth

Excerpted from: The Secret Destiny of America

In the Congressional Library at Washington, D.C., is a curious little book entitled, Vindication of the True Art of Self Defense. It is a work on fencing and dueling, published in 1724 by Sir William Hope, Bart., a deputy governor of Edinburg Castle. In this copy and facing the title page an engraving has been inserted of the badge of the Royal Society of Swordsman; underneath it is written, "Private Library of Sir William Hope." The Library of Congress has had this book since 1879.

The text of this curious little book is of no special interest, but on the blank fly leaves is written in the hand of Sir William Hope an extraordinary prediction concerning the destiny of the United States of America. It was written, signed and dated forty-four years before the beginning of the Revolutionary War.

At the time the thirteen American colonies seemingly had no dream of independence. George Washington had just been born, in Virginia. Twenty of the fifty-six men who were to sign the Declaration of Independence were then small boys, and eighteen others were yet unborn

Little information is available concerning Sir William Hope; but from the text of his prediction it appears that he was devoted to the study of astrology, and based his strange prophetic poem upon an interpretation of the starry influences. There is also a hint of the Cabala in the manner used by Hope to indicate the men referred to in his prediction.

The prophecy of Sir William Hope begins with these lines:

Whose stars do bear him fortunate.

Of thy near fate, Amerika,

I read in stars a prophecy:

Sixteen in halfs--each holds a name;

From the text, the prophecy covers the period from 1732 to 1901. From the history of our country during this period of time, Hope selected four men, and the numbers which he used to indicate them are shown as the prophecy unfolds. he summarizes the lives of these four men by totaling the number of years that each lived. He does this in the line, "Four, eight, seven, six--added ten--" Four plus eight, plus seven, plus six, equal 25, the added ten is the cipher making a total of 250. At the time of his death George Washington was 68, Abraham Lincoln 56, Benjamin Harrison 68, and William McKinley 58. The total of these years is 250.

The next twelve lines are devoted to a description of George Washington and the struggle of the American colonies for independence.

This day is cradled, far beyond the sea,

One starred by fate to rule both bond and free.

The prophecy is dated 1732 and in that year George Washington was born beyond the sea, in Virginia. the reference to bond and free is believed to indicate slavery would exist during Washington's time in the colony of Virginia.

By double four we can read 44, which if added to the date, 1732, gives 1776, the year of the American Declaration of Independence.

Whose deeds shall link him to a deathless fame.

There are six letters in the name George, and ten in Washington, and this Cabala when added to the previous and subsequent descriptions, can leave no doubt as to the man intended in the prophecy.

Whose growing love and ceaseless trust wrong none

And catch truth's colors from its glowing sun!

Death's door shall clang while yet his century waits

His planets point the way to other's pending fates.

These lines contain not only a glowing tribute but an exact bit of prophecy. Washington died on December 14, 1799, just 17 days before his century passed into history.

Till all the names on freedom's scroll shall fade,

Two tombs be built, his loft cenotaph be made--

Freedom's scroll is the Declaration of Independence, which is now carefully preserved under yellow cellophane because the signatures have begun to fade. The body of George Washington has rested in two tombs; and his lofty cenotaph, the Washington Monument, is 555 feet high, the tallest memorial ever constructed to the memory of a man.

If six times ten years, or sixty years, be added to the date of the death of Washington the result is 1859, when John Brown raided Harper's Ferry and was hanged for attempting to incite a slave revolt, a circumstance leading directly to the United States of America engaging in the great Civil War to preserve the freedom of all its people.

Whom Mars and Jupiter strike down before his work is done.

When cruel fate shall pierce, though artless of its sword;

Who leaves life's gloomy stage without one farewell word.

A softly beaming star, half veiled by Mar's' red cloud

Virtue, his noblest cloak, shall form a fitting shroud.

[Editor: He goes on to make the connection to Lincoln, President Harrison and President McKinley with the next verses.]

Following this, is the statement that the prophecy was 'Writ at Cornhill, London, 1732.' At the bottom of the page are four other lines written by some later member of the Hope family as a tribute to the memory of Sir William Hope:

The learned hand that writ these lines no more shall pen for me,

Yet voice shall speak and pulses beat for long posterity

Then found this truth, his search form youth, Greatness is God's accident.--

As is usual with material of this kind, efforts have been make to prove the Hope Prophecy to be a forgery; but up to the present time no tangible evidence has been advanced to disprove the prediction. Always in these matters, the critic takes the attitude that such predictions can not be made, and if a writing appears to be authentic then it must be imposture. The book has been in the Library of Congress for more than 60 years. The prediction about both Harrison and McKinley relate to incidents taking place after the book was place in the Congressional Library.

In facsimile, one of the two pages of the original prophecy is illustrated here; [you'll have to go to the test in the book, the link is down below] both have every appearance of being genuine and authentic.

It is most reasonable to assume that the Hope prophecy is a genuine example of foreknowledge concerning the future of the United States of America.