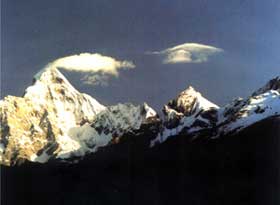 Unveiling the Beauty of a Fairyland Foursome

The Siguniang (four girls) Mountains are as beautiful as their name, but uncovering their veils and appreciating their many charms can be exhausting. Unfortunately, time constraints allowed me to see only a fraction of their beauty, but that was more than enough to make me reluctant to leave the area.

Last December, I had an opportunity to visit the Siguniang Mountains, which are located in Xiaojin County of the Aba Tibetan and Qiang Autonomous Prefecture in western Sichuan Province. They are about 220 kilometres away from Chengdu, capital of the Southwest China province.

At first I hesitated about taking the trip, as I had been rushing from one place to another in southern Sichuan for a week. I could sleep the whole weekend away to make up for the scarce slumber if I didn't go. Moreover, having lived in a metropolitan city for many years, I had formed the opinion that any scenery so close to a large city could offer no real fun.

But I went at last, because my roommate Lao Yang, who has lived in Sichuan for decades, told me that I would regret it if I didn't go. The road seemed endless. Our van wound its way over mountains and across huge valleys like a small bug, elevating us higher and higher.

Gradually, I felt my legs become numb, my eardrums under pressure and my head dizzy. My companions told me these were symptoms of altitude sickness, because we were already nearing Balang Pass, which is 4,487 metres above sea level.

The sky was azure. Snow-covered mountain tops could be seen not far away, like piles of cotton. Ice swords hung from rocks along our way. We were getting close to our destination. Balang Pass, part of Baland Mountains, was so high and the view so wide that we felt everything was below our feet. We made a brief stop to take photos. After just a few steps, I had difficulty breathing, as the air is much thinner than that of Chengdu, which is located in the centre of the Sichuan Basin.

After another six hours, we arrived at last. To our joy, we were greeted by four young and beautiful Tibetan girls in traditional Tibetan garments at the entrance to the scenic area. They presented every guest with a white hada, a long piece of silk used as a greeting gift among Tibetans, and a bowl of barley beer. We were glad to know that the four girls would accompany us as tour guides during our visit.

At lunch, the host served us yak meat, mushrooms and barley beer. Tibetans are known for their hospitality. During the lunch, the girls sang and danced, toasting and offering their best wishes to guests. The Tibetan girls seemed to be very honest and kind-hearted, as well as brave and unaffected. Generally, they won't refuse if you invite them to sing or dance. Their beauty, I think, not only comes from their sun-bathed complexion and regular features, but from their unsophisticated and simple nature.

After lunch, we set off to the scenic area. Joy and laughter filled our journey. At our request, the girls sang beautiful melodies one after another. Meanwhile, they did not forget their duty - introducing us to a variety of scenic spots.

During the trip, I became friendly with Zhuoma and Yixilamu, both of whom were 18 years old. Their names mean "beautiful fairies" in the Tibetan language. Yixilamu is truly a Tibetan beauty. She has a tall stature and charming face. I later learned that she was born in nearby Danba County, where girls are famous for their beauty. Yixilamu said she had worked in the area for a year after her graduation from a tourism school.

Zhuoma looked younger than her age. She was the youngest girl in her family. I was surprised when she told me that her family owned more than 100 yaks, which were worth a lot of money. "You are the daughter of a millionaire!" I joked. But Zhuoma said that was nothing extraordinary in Tibet.

She also told me that Tibetan girls are the best, because most of them are very hardworking and thrifty. When asked whether she would marry a Han young man, she said: "Maybe. That depends on my fate."

Zhuoma was a follower of Tibetan Buddhism. When someone asked Zhuoma half-jokingly what she thought about me, she studied me for a second and shook her head: "No. He is not strong enough to herd yaks." Everyone burst into laughter. According to old Tibetan customs, a young suitor must herd yaks for the girl's family for three years before he can marry the girl.

The Siguniang Mountains area consists of the Siguniang Mountains, Shuangqiao Gully, Changping Gully and Haizi Gully. The Siguniang Mountains are 6,250 metres high, reputed by some to be the "Oriental Alps." Snow covers the mountain top all year round. Under a blue sky and white clouds, the dark rocks and clean rivers are coated with green moss and various flowers, or golden grass and leaves, milky fog, white snow and crystal-like ice. The air is so fresh and the valleys so quiet that one forgets the clamour and bustle of a metropolis.

That night was a sleepless one for me. We were totally intoxicated by the Tibetans' hospitality. Dressed in Tibetan clothes, we drank, danced and sang. Nearly everyone was thrown into the sky by the Tibetans, an activity called shaikang, literally meaning sifting chaff, which is the way Tibetans express their welcome and hospitality to guests.

The next morning before we left, one of my companions handed me a small gift, which was sent by Zhuoma. He said Zhuoma felt sorry for what she had said during the trip and sent me the gift as a souvenir. In fact, she had a very good impression of me, my companion replied. I smiled.

Then, I hurried to a small store on the street to buy something for Zhuoma in return. Yixilamu, jumping from a van, caught me and put gifts from her and the two other girls into my hands. She said she hoped that I would revisit the Siguniang Mountains in the future and was willing to be my guide again.

Our mini-bus started up. Looking back, I found the four girls standing at the entrance of our hotel, waving goodbye.

back to: China page