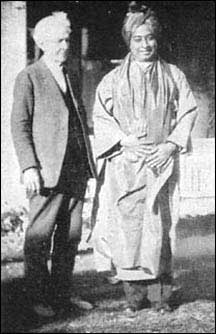 My friend Luther Burbank has passed on. His body lies under a Lebanon cedar that he planted years ago in his own little garden, but his spirit smiles at us today from every sweet flower that blooms by the wayside. He, who was so close to nature, so confidential and so understanding to her, is now part of her great spirit, whispering in her winds, shining in her stars, walking the dawn with her.

I loved him very dearly. He was one of the saintliest men I have ever met. To look at his sensitive face with its compassionate eyes and kindly smile —was to see a man bathed in a great spiritual radiance. I would not mind walking all the way from New York to Santa Rosa to meet him and discuss humanity and spiritual subjects with him once again. His vast learning and genuine modesty repeatedly reminded me of the trees that are bent low with the burden of ripening fruits. It is always the fruitless trees that lift their heads high in the sky in empty boastfulness.

His love of the voiceless plants, creepers and flowers intensified his love for mankind. He had a burning desire to be of service, to help to bear as much as possible of the world's burden. He was well-acquainted with humility, patience, sacrifice. His life was simplicity itself. He knew the worthlessness of luxury, and the joy of few possessions.

The keynote to his whole personality was love, great love. His heart especially went out to children, yearning to see them given an opportunity to express the infinite goodness within them. "But the educational system of today is afraid to experiment." he said to me. "Nothing worth while is possible without fearless experiments. At times the most daring experiments are needed to bring out the best in fruits and flowers. The human body, human mind and human soul are much more complex, and important, than those of the vegetable world, so the experiments should likewise be more daring, more numerous. . . . The experiments you are carrying on in your schools in India are of much value to humanity."

I like to remember that Luther Burbank was open-minded to the spiritual message of the East. "In spite of the Western knowledge of science," he told me repeatedly, "we have much to learn from the East. There they have great stores of truth that the Western mind as yet scarcely knows the existence of."

Just before his death, Burbank dramatically martyred himself by calling himself an infidel so that people might wake up from their sleep of superstition, and seek God rationally. As Jesus offered himself for love, so Burbank was willing to be crucified by public opinion for the sake of truth and the destruction of ignorance. Many newspapers actually called Burbank an "atheist," considering him as one more scientist without faith in God.

An atheist denies the existence of God. But an infidel is simply a disbeliever in the established religion. To a Turk, a Christian is an infidel. Yet both believe in God. But the public does not realize the fundamental difference between the two terms. To most of them, Burbank has denied God. But how far that is from the truth! His faith in the great power that rules the mighty forces of nature was the deepest chord in his being. He himself declared to his interviewer that he was an infidel only in the sense that Jesus was an infidel—because they both rebelled against prevailing systems. But let us read Burbank's actual words as recorded by the interviewer, Mr. Edgar Waite, and first published by the S. F. Bulletin in a copyrighted article:

"Religion grows with the intelligence of man, but all religions of the past and probably all of the future will sooner or later become petrified forms instead of living helps to mankind. Until that time comes, however, if religion of any name or nature makes man more happy, comfortable, and able to live peaceably with his brothers, it is good. . . .

"The idea that a good God would send people to a burning hell is utterly damnable to me. I don't want to have anything to do with such a God. But while I cannot conceive of such a God, I do recognize the existence of a great universal power which we cannot even begin to comprehend. . . .

"As for Christ—well, He has been most outrageously belied. His followers, like those of many scientists and literary men who produce no real thoughts of their own, have so garbled His words and conduct that many of them no longer apply to present life. Christ was a wonderful psychologist. He was an infidel of his day, because He rebelled against the prevailing religions and government. I am a lover of Christ as a man, and His work and all things that help humanity, but nevertheless, just as He was an infidel then, I am an infidel today."

In reference to the theory of Reincarnation, in which his friend Henry Ford has recently declared his belief, Burbank told the interviewer: "The theory of Reincarnation, which originated in India, has been welcomed in other countries. Without doubt, it is one of the most sensible and satisfying of all religions that mankind has conceived. This, like the others, comes from the best qualities of human nature, even if in this, as in the others, its adherents sometimes fail to carry out the principles in their lives."

Burbank, when asked to state his position more clearly, said later: "Euripides long ago said, 'Who dares not speak his free thought is a slave.' I nominated myself as an 'infidel,' as a challenge to thought for those who are asleep. The word is harmless if properly used. Its stigma has been heaped upon it by unthinking people who associate it with the bogey devil and his malicious works. If my words have awakened thoughts in narrow bigots and petrified hypocrites, they will have done their appointed work. . . .

"Most of us possess discriminating reasoning powers—can we use them or must we be fed by others like babies? What does the Bible mean when it distinctly says, By their works ye shall know them? Works count far more than words with those who think clearly. . . .

"I love everybody. I love everything. I love humanity—it has been a constant delight during all my seventy-seven years of life, and I love all the works of nature. . . . All plants, animals, and man are already in eternity travelling across the face of time. . . ."

The urge toward infinite realization is in every human soul. But in some, as in Burbank, that urge is keenly felt, tirelessly probing, actively seeking fulfillment. The stupendous power that guides all creation came very close to Burbank in the course of his chosen work. He felt its overwhelming grandeur, its incomprehensible goodness and beauty. And he knew that he, as a man, could not define It or know It completely. On all subjects, he kept an open mind, sure that the truth could not be so small as to be exhausted and contained in one religion, one age, one mind. . . . We should honor him for that.

Henry Ford writes of Burbank: "There was in him a beautiful and abiding faith in the permanence of that which now lives, whatever form it may take, here or hereafter, and whatever function it may perform in what we call the 'world of matter.' He believed that no life was ever lost. . . . His faith was so great and firm that he did not feel the need of being over-positive about things he could not scientifically prove."

Hail and farewell! It is the law of life. I am happy to remember the fragrance of his life, and that it blew across my way. I like to think of him now, in every flower and tree, and in the faces of little children. 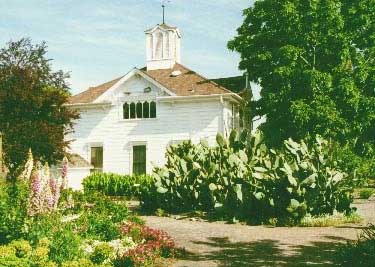 back to: Varieties of Spiritual Thought