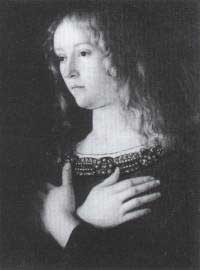 THE LOST GOSPEL OF MARY MAGDALEN

By W. B. Seabrook

Translation of an old Coptic manuscript in the British Museum, probably dating from the early second century, has just revealed an apocryphal lost Gospel, in which Mary Magdalen appears as a character of much greater importance than that given her in the four Gospels of the New Testament. It has created tremendous interest, for while the King James version implies that Mary Magdalen became one of the most devoted of Christ's women disciples, it has very little to say about her directly.

The New testament tells only of how Jesus cast out "seven devils" from her, of how she watched with the other women at the Cross, and of how it was she to whom Christ first appeared after His resurrection. The legends of her great beauty, of the amazing loveliness of her red-gold hair, of her career as a brilliant and abandoned courtesan before her conversion, and of her repentance in a desert cave, all come from outside sources, mostly early Greek and Hebrew writings.

The lost Coptic Gospel tends to confirm this picture of her, but indicates that she was even more wonderful as a Saint than she had ever been as a sinner. It pictures her as a woman whose soul was glowing with an inner mystic light, with an intuitive occult knowledge of the meaning of Jesus' teachings that not even the Apostles could quite comprehend.

In an early part of the Coptic Gospel, Jesus says:

"Wherefore have I said unto you aforetime, in the place where I shall be, there also will be my twelve ministers, but Mary Magdalen and John the Baptist shall be higher than all the disciples."

This apocryphal Gospel deals chiefly with mystic and esoteric matters, and indicates a thing which a few scholars have always suspected—that many of Christ's teachings had a secret, hidden underlying meaning intelligible only to the initiates.

The following typical passage from the Gospel, called "Pistis Sophia," illustrates both its mystical trend, and also the high place of Mary Magdalen among the disciples: A difficult and extremely interesting discourse follows between Jesus and Mary on magic, sorcery and soothsaying. She asks:

"With all men who know the mystery of the magic of all the rulers of all the aeons of the fate and those of the sphere, in a way in which the transgressing angels have taught them; if they invoke them in their evil mysteries, that is to say, in their evil magic rites, will they accomplish them henceforth from this hour or not?"

She wants to know, by this question, whether the new power of Christ has completely destroyed the power of devils and devil-worshippers and black magicians who derive their skill from the powers of darkness—a question which has puzzled all the mystic theologians ever since.

Mary, evidently herself a great mystic, insists further, and asks:

"Master, surely the ordainers of the hour and diviners (soothsayers, necromancers, witches and fortune tellers) will no more tell men what will come to pass henceforth from this hour?"

"If the ordainers of the hour chance upon the fate, and the sphere, turning toward the left, according to their first emanations, their words shall come to pass, and they will say what is to take place; but if they chance on the fate, or the sphere, turning to the right they cannot obtain any truth, since I have changed their influence, their four angles, their three angles, and their eight configurations."

This, by the way, may be involved and difficult for the average reader, but any one who has studied the recent scientific speculations with reference to the possibility of identifying time with the fourth spacial dimension of Einstein, will realize that it has a profound and definite meaning.

And in many subsequent passages, Mary Magdalen emerges as a beautiful and inwardly illumined figure. For instance:

"It came to pass that when Jesus had said these things unto His disciples, that Mary Magdalen, the fair in speech, the blessed one, bowed herself at the feet of Jesus, saying: 'Master, suffer me to speak and be not wroth if I distress Thee with frequent questioning'."

And after Christ has recounted the great central mystery of Pistis Sophia, which the others cannot understand, she is inspired and speaks:

"Master, my indweller of light hath ears, and I hear in my light power, and Thy Spirit which is with me, is sober.

"Hearken, therefore, I will speak concerning the repentance which Pistis Sophia made, speaking her sin and all that befell her."

Then Peter, starting forward, said unto Jesus: "Master, we cannot endure this woman to take our place from us, and not suffer us to speak but she speaks many times."

And Jesus answered and said: "Let him in whom the power of the spirit seethes to make him understand, let him come forward and speak."

Later, according to this record, when the disciples were cast down and lost courage because they could not understand Jesus' words, Mary came forward, and threw herself prostrate and kissed the feet of Jesus and worshipped Him. A misunderstanding develops on the meaning of Jesus' saying:

"He who shall not leave his father and mother to follow me is not worthy of me."

The disciples cannot understand it, in view of the old Mosaic law that "He who shall leave (abandon) his father or mother, let him die the death."

Jesus replies: "What I said was: 'Ye shall leave your parents, the rulers, that yet may be all children of the first everlasting mystery.'"

Still the disciples do not understand, but then, "the light power" which was in Mary Magdalen seethed in her and she said:

"Whoever shall remain without the Saviour and His mysteries, which are all His parents, let him die the death, nay, let him be lost in utter destruction."

Among the other mystical discourses of Jesus recorded in this lost gospel is the following:

"And they seal this counterfeit to the soul, so that it may be in every kind of sin and all the desires of the world.

"It is because of this that I have brought the mysteries into the world, which break all the bonds of the counterfeit of the spirit, which make the soul free and ransom it from the hands of its parents, the rulers, and transform it into pure light, to bring it into the kingdom of the True Father, the first everlasting mystery."

The Jesus pictured in this Coptic gospel corresponds to the beliefs held concerning Him by many oriental Christian sects today which have no direct connection of any sort with the Christian church, either Catholic or Protestant, as it is known to the western world. These sects have many gospels and supposed records of their own, which are neither included nor mentioned in the Bible. They make of Jesus an illumined oriental mystic as well as a sublime moralist. According to the oriental gospels, Jesus spent His time in the monasteries and lamaseries of India and Tibet, where He was perfected in the esoteric mysteries.

*This is yet another reference of Jesus's knowledge of the law of reincarnation.
Similar references are found even in the King James version of the Bible.—Ed.

back to: The Rosary, One Solution to the World Crisis