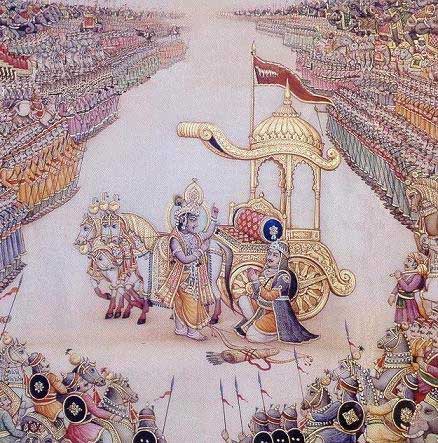 For thousands of years, we have believed in the divinity of Shri Krishna. For us he was a Karmayogi par excellence who gave us action oriented philosophy of life in the form of Bhagavad Gita. But questions have constantly haunted us as to whether Krishna was a historical or mythical character and whether the war of Mahabharata was actually fought.

Till recently, we did not have the wherewithal to search for and establish the truth. But modern scientific tools and techniques like computers with planetarium softwares, advancements in archaeological and marine archaeological techniques, earth-sensing satellite photography and thermo-luminescence dating methods, all have made it possible to establish the authenticity and dating of many events narrated in ancient texts like the Mahabharata. Recent archaeo- astronomical studies, results of marine-archaeological explorations and overwhelming archaeological evidence have established the historicity and dating of many events narrated in the Mahabharata. These have led to the conclusion that Mahabharata War was actually fought in 1478 BC and Shri Krishna's Dwarka City got submerged under the sea in 1443 BC.

Astronomical Evidence: In the Mahabharata references to sequential solar and lunar eclipses as also references to some celestial observations have been made. Dr RN Iyengar, the great scientist of Indian Institute of Science, Bangalore, examined relevant references and searched for the compatible dates by making use of planetarium software (PVIS and EZC). He concluded that most of these references were internally consistent and that the eclipses and celestial observations of Mahabharata belong to the period 1493 BC-1443 BC of Indian History, (refer Indian Journal of History of Science/38.2/2003/77-115).

In the Mahabharata, there are references to three sequential solar eclipses and some other planetary positions. Reference to the first solar eclipse comes in the Sabha Parva (79.29), graphically described by Vidur when Pandavas start their journey to the forest on being banished for 12 years of life in exile and one year of life incognito after they had lost everything in the game of dice. After 13 years of exile and incognito life, the Pandavas returned to Hastinapur and demanded their kingdom back, but Duryodhana refused. Several efforts to prevent war failed and war became imminent.

There is a reference to the second solar eclipse in the Bhisma Parva (3.29), following a lunar eclipse occurring within the same fortnight a few days before the actual war of Mahabharata. These eclipses occurred after 14-15 years of the first solar eclipse The epic also refers to some unfavorable planetary positions between the second solar eclipse and the beginning of the war on Kartika Purnima (Bhisma Parva 3.14 to 3.19). On Kartika Krishna Ashtami, Saturn was near Rohini and Mars was between Jayestha and Anuradha. Twenty two days later, on Kartika Purnima, Saturn was near Rohini, Mars was near Jayestha (probably Uranus) was between Citra and Swati.

Marine Archaeological explorations around Dwarka: The on-shore and off-shore explorations carried out in and around Dwarka during last 50 years have revealed that Dwarka was a prosperous city in ancient times, which was destroyed and reconstructed several times. The work of great excavators like ZD Ansari and MS Mate and chance discovery of temples of 9th century AD and 1st century AD buried near the present Dwarkadhish Temple, prompted setting up of a Marine Archaeology Centre jointly by the National Institute of Oceanography and the Archaeological Survey of India. A project for marine archaeological explorations in Dwarka was initiated under the dynamic leadership of great marine archaeologist Dr Rao, who has the distinction of being awarded "The World Ship Trust Award" for outstanding research in this field.

Dr Rao's team consisted of expert under-water explorers, trained diver-photographers and archaeologists. The technique of geophysical survey was combined with the use of echo-sounders, mud-penetrators, sub-bottom profilers and under-water metal detectors. This team carried out 12 marine archaeological expeditions between the year 1983 to 1992 AD and articles/antiquities recovered were sent to Physical Research Laboratory for dating. By using thermo- luminescence, carbon dating and other modern scientific techniques, artifacts were found to be belonging to the period 15th to 18th century BC. In his great work, The Lost City of Dwarka, Dr Rao has given scientific details of these discoveries and artifacts.

Conclusions arrived at after carrying out these under-water archaeological explorations support and validate the dates arrived at through astronomical calculations. These also prove that the reconstructed city of Dwarka was a prosperous port town, and that it was in existence for about 60-70 years in the 15th century BC before being submerged under the sea in the year 1443 BC.

Attempts have also been made to determine the year of Mahabharata from the details available in scriptures which include Puranas. When events are unrecorded for quite some time and are passed on to the succeeding generations through Shruti and Smriti, the inaccuracies and myths get mixed with reality on account of differences in the perceptions of different individuals. However, it is for the objective rational individual mind to find out and differentiate fact from fiction. Important information, including the genealogy charts of rulers after Yudhishthira, are available in Srimad Bhagvatam, Matsya Puran and Vayu Purana. On the basis of such evidence, famous historian Lord Cunningham assigned the year 1424 BC to the War of Mahabharata.

Evidences referred to earlier point more to the probability that nobody had come to India from Central Asia or from any other place. In fact, Indo-Aryan kings and warriors had come to Kurukshetra in their war chariots from all over India to participate in the Mahabharata War and that a whole lot of people got killed in that war. The killers as well as the killed, the victors as well as the vanquished, the charioteers as well as the foot soldiers, all were Indians who had already experienced thousands of years of prosperous and advanced civilization. Archaeology also records a continuous indigenous evolution of Vedic civilization going back to 5000 BC at sites like Mehrgarh and Koldi.

It is sad that so far we have not known even a fraction about our ancient civilization and cultural achievements. Detailed factual data in our ancient texts and Sanskrit manuscripts is beckoning us to carry out further research. By making use of modern scientific instruments and techniques we must discover the true facts about our ancient past. If we do, we may be able to gather supportive evidences to reassert that ours was the oldest civilization in the world and that our ancestors, the Vedic Aryans, had travelled from India to various parts of Asia and Europe to spread our knowledge, civilization and culture. When this is recorded we would be able to hold our heads higher and be able to take on the future with greater confidence.