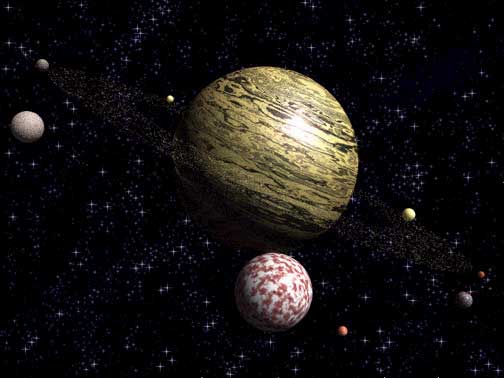 Is Planet X the 12th Planet?

What is Planet X? Is it the 12th planet also known as Nibiru and Marduk or some other anomaly headed our way? Zecharia Sitchin first brought the awareness of the 12th planet to the rest of the world by translating thousands of Sumerian tablets. Nibiru (translated as 'planet of [the] crossing') is a planet on a huge ellipitcal orbit that passes close by the earth about every 3,600 years or so.

Planet X is out past Pluto headed this way on an ellipitcal orbit also. Some scientists say it might pass by earth in the spring of 2003. Are they one in the same? Many believe Planet X may be smaller than Nibiru. One thing is known from Sitchin's work, the 12th planet is\was home of the gods of Sumeria who came from Nibiru or the 12th planet in spaceships 450,000 years ago. The second important element to consider is that Sumeria is presently one of the oldest known civilizations, in fact, he attributes much in the way of knowledge, architectural achievements and spiritual and cultural advancements to these visitors. Ah, but there's the rub, he interprets things from a 'flesh and blood' perspective. Material explanations prevail over things of the Spirit.

There is a bridge to lost esoteric scrolls that Sitchin misses. It's found in his second book, The Stairway to Heaven. On page 86 of the hardbound edition he writes, "It was the land whose name--Shumer [Sumer]--literally meant Land of the Watchers. It was indeed the Egyptian Ta Neter-- Land of the Watchers, the land from which the gods had come to Egypt."

Now this is where it gets interesting. In the late 18th century, 3 newly found Ethiopic scrolls were brought to England. Almost 50 years pass until they were finally translated into English. Turns out they were the long lost books of Enoch, great-grandfather of Noah. A book that is at the very least apocryphal but really belongs in the Bible. It will never be afforded that place of honor however because Enoch warns mankind of the fallen angels among us. He calls them Watchers.

These Watchers voluntarily descended to earth when they 'lusted after the daughters of men.' It was actually the second fall from Heaven as recorded in the Old Testament. The original fallen angels, cast down by Archangel Michael, were called Nephilim which eventually got changed from 'cast down angels' to the milk toast version, 'giants in the earth.' Yes, Virginia, the Bible has been changed many times, many ways. Enoch came to warn the people of the warring and whoring ways of the Watchers.

Atlantis, out in the Atlantic, was able to maintain a very high culture immersed in the Spiritual Laws laid down by the Great Adepts but finally she succumbed to selfishness, desires of the flesh and the materialistic world that the Sumerians espoused. Noah, Enoch's great-grandson, warned the Atlanteans to change their ways or else cataclysm will wash the land clean. You know the result, well, your subconscious does if you don't.

On this planet are several evolutions: Sons and Daughters of God, the Children of God and the Nephilim all mentioned in the Bible. We also have the Watchers, exposed by Enoch. Sitchin found another to add to the list, the anunnaki. He says they were created by the aliens from Nibiru as a worker/slave race. Since they weren't created by God, they are in effect, robots who look not to God as the Supreme Deity but to their makers (the aliens from the 12th planet). This whole hodgepodge has been reincarnating to the present day. The Watchers and Nephilim know they have little time before the Judgement so they hide themselves among us, tying themselves karmically to those who love God, so that it will be difficult for God to take them. They also gravitate towards positions of power.

Many, including Sitchin, tend to believe all the great legends, myths, documented stories and eyewitness accounts of miracles and unexplained phenomena are connected to these aliens; when in reality, they should be attributed to the power and Holy Spirit of Almighty God and his Heavenly Hosts working with the Sons and Daughters of God.

I tend to doubt Planet X is the 12th planet, otherwise I think waves of spaceships would be arriving as they did long ago. Whether it is or isn't, the bigger danger is the havoc they wreak in the economies, institutions and religions on earth. Their planet's gravitational pull is the least of our worries.

To buy and read more about the Lost Books of Enoch and the fallen angels, click on Fallen Angels and the Origins of Evil. Sitchin's first three books and his latest, are listed below as well.

back to The 12th Planet, Planet X Files and Anomalies