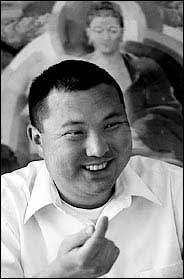 An Ex-Telemarketer's Other Life as a Buddhist Saint

Landscaping, telemarketing, factory work, a job in a restaurant, a job as a customs inspector. "If I wrote down everything on my résumé, people probably wouldn't hire me," said Erdne Ombadykow, "because I've kept changing." If they only knew.

This pleasant young man from Colorado in a short-sleeved white shirt has been identified by the Dalai Lama of Tibet as the latest of many reincarnations of a Buddhist saint who lived in northern India 400 or 500 years ago.

On and off for about half of every year, Mr. Ombadykow spends time at what might be called his day job, as chief lama here in the republic of Kalmykia, on the northwest coast of the Caspian Sea. It is his ancestral homeland - a piece of Russia that is the only predominantly Buddhist region in Europe. He wears his reincarnation lightly.

"I don't make it a big deal," he said the other day as he sat in his small, sunlit office. "I don't say, 'I'm the biggest saint, who was recognized by the Dalai Lama, la-la-la, la-la-la.' " He threw his arms in the air. "We are all reincarnations," said Mr. Ombadykow, who has been Mr. Ombadykow for 32 years.

"As I see it, every human being and every animal is a reincarnation," he said. "If George Bush dies - with so many good things in this life - when he dies you would want to bring him back so he can make peace through the whole world."

Then, tangled in his own logic and with Iraq in mind, he laughed. "Of course, that won't happen," he said.

An ethnic Kalmyk who was born in Philadelphia to immigrant parents, Mr. Ombadykow said he had always wanted to be a Buddhist monk, the way other boys want to be policemen or firemen. He was sent at the age of 7 to study at a monastery in India, where his past identity was proclaimed by the Dalai Lama. He was given the name that has been handed down from one incarnation to another through the centuries, Telo Rinpoche.

"I don't like to talk about it much because it's a delicate subject," he said. "It sounds strange, unusual to people who don't have a good understanding of it." He added: "Even if I am a reincarnation, there's nothing I can do about it. I'm still who I was, whether because of reincarnation or not."

In Erie, Colo., he is just another man on the street, supporting his wife and their 6-year-old son with what he calls "odds and ends jobs." His face is as round as a copper penny and he wears his hair just a millimeter longer than the shaved head of a monk. His wife is an ethnic Tibetan and a Buddhist, which makes life easier. "She understands," he said. "If I had married an American blonde she would probably leave me as soon as I came to Kalmykia."

Most of Mr. Ombadykow's relatives now live in and around Howell, N.J., in Monmouth County. Most are in the construction business like many Kalmyk immigrants, including his father. His spiritual forebears come from another world. 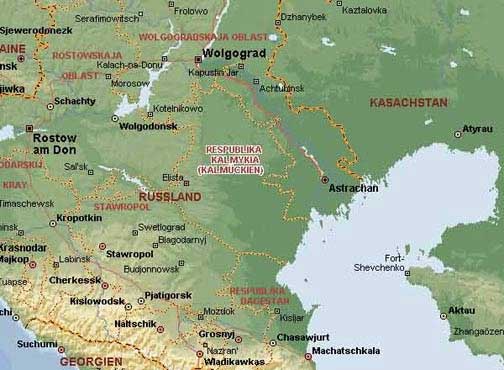 The first Telo Rinpoche was a revered hermit who meditated in caves near a river. He had special powers, Mr. Ombadykow said, and when he threw the bones of a fish back into the river, they came to life again. The most recent of his predecessors was a prominent anti-Communist and a deputy prime minister in Mongolia who died in 1968, he said.

Mr. Ombadykow said he did not really feel their presence. But people who knew the latest Telo Rinpoche say they see similarities in the two men's ways of thinking. Mild as he is in his manner, his pedigree carries weight among the Buddhists here.

"Am I as highly educated as the previous incarnation?" Mr. Ombadykow said. "Maybe not. But people respect me. They don't see me as the new guy. They see me as the last guy."

The discovery of Mr. Ombadykow was the product of a long search after the death of his predecessor, he said. But nothing in this life had prepared him for the role he was assigned. After the collapse of the Soviet Union in 1991, the Dalai Lama dispatched him, at the age of just 19, to lead a Buddhist revival among the 160,000 Kalmyks who live here. Ethnically Mongol, they form a broken fragment of the ancient Mongol empire, embedded now in European Russia. Under Communist rule, their religion was crushed and their temples were destroyed.

Mr. Ombadykow knew nothing of Kalmykia's history when he was dispatched to be its spiritual savior. He did not speak the language. He did not understand the culture.

"I didn't even know where the hell Kalmykia was," he said. "In America we always thought we were Mongolians. People would ask me, 'Are you from Mongolia or Outer Mongolia?' I didn't have a clue."

back to: Karma, Reincarnaion and NDE