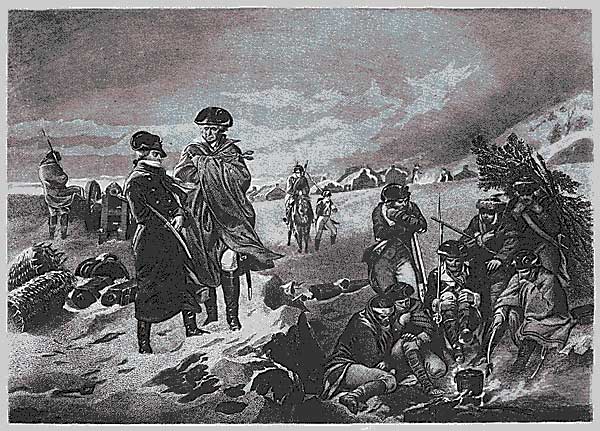 Washington and Lafayette at Valley Forge, winter of 1777 - 1778. Copy of an engraving by H.B. Hall after Alzono Chappel.

From the Editor: Here are some nice excerpts describing Washington's tremendous faith in God and his extraordinary ability to not only talk the talk but walk the walk. He led by example. And because he did, God invested a more than ordinary amount of light and grace in him. The presence of God in him, re-enforced the faith in all his troops. After this excerpt the authors go on to describe Von Steubens's contribution to help mold the already steeled troops into a disciplined fighting force. It is an excellent book describing God's hand in America's destiny.

Excerpts from: The Light and the Glory by Peter Marshall and David Manuel, pp. 323-324.

"I heard a fine example today, namely, that His Excellency General Washington rode around among his army yesterday and admonished each and every one to fear God, to put away wickedness that has set in and become so general, and to practise the Christian virtues. From all appearances, this gentleman does not belong to the so-called world of society, for he respects God's Word, believes in the atonement through Christ, and bears himself in humility and gentleness. Therefore, the Lord God has also singularly, yea, marvelously, preserved him from harm in the midst of countless perils, ambuscades, fatigues, etc., and has hitherto graciously held him in His hand as a chosen vessel."

"When it came to prayer, however, Washington preferred to pray in private, and it is doubtful that he ever prayed more fervently than he did that winter. One of the number of accounts of people accidently discovering him in prayer involved the General's temporary landlord, Isaac Potts. ... " [see the story under the picture of "The Prayer at Valley Forge," on the previous page.]

"Something else happened that winter which says much about the quality of Washington's faith. A turncoat collaborator named Michael Wittman was captured, and at his trial, it was proven that he had given the British invaluable assistance on numerous occasions. He was found guilty of spying and sentenced to death by hanging. On the evening before the execution, an old man with white hair asked to wee Washington, giving his name as Peter Miller. He was ushered in without delay, for Miller had done a great many favors for the army. Now he had a favor to ask of Washington, who nodded agreeably.

"I've come to ask you to pardon Michael Wittman."

"Washington was taken aback. "Impossible! Wittman has done all in his power to betray us, even offering to join the British and help destroy us." He shook his head. "In these times we cannot be lenient with traitors; and for that reason I cannot pardon your friend."

Washington was puzzled. "And you still wish me to pardon him?"

"I do. I ask it of you as a great personal favor."

"I ask it because Jesus did as much for me."

Washington turned away and walked into the next room. Soon he returned with a paper on which was written the pardon of Michael Wittman. "My dear friend," he said, placing the paper in the old man's hand, "I thank you for this."

Such charity did not weaken him in the army's eyes; the men loved him for it, as did his officers. NO one who had served with him could understand why there were generals and Congressmen who wanted to see him replaced. But then, the latter did not know how it was at Valley Forge. "The greatest difficulty," said the young Marquis de Lafayette, "was that, in order to conceal misfortunes form the enemy, it was necessary to conceal them from the nation also."