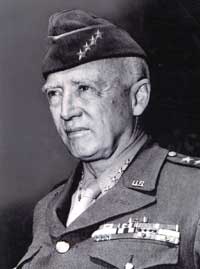 General Patton on Pacifism
and Preaching Pacifism from the Pulpit

"They (religious leaders) should read all of the Bible, not just the part they like."

General George S. Patton had a knack for getting straight to the point. He always wanted his commanders to 'get the facts' before making a decision. Sometimes the truth got him into trouble but more often then not he cut to the quick. Here is his take on pacifism and 'pulpit killers' taken form Patton's Principles by Porter B. Williamson, one of his former officers.

"Gen. Patton did not have kind words for those who could not face death. He had harsh words for the religious leaders who opposed the efforts of the military and preached, "Thou shall not kill." Gen. Patton called these types, "pulpit killers!" He commented, "These pulpit killers that go around saying that the Bible says that man dare not kill causes the death of many thousands of good soldiers. Damn little those pulpit killers know about the Bible. They know even less about the way God works. They should read all of the Bible, not just the part they like! God never hesitated to kill. God never hesitates to kill when one man or any race of man needed to be punished. God helped David kill Goliath, didn't he? How about Noah and the Ark? All of the rest of the people were killed in the flood! God took the blame for this mass murder. How about the Red Sea which opened up long enough for one race to escape and another race to be killed. Don't talk to me about God not permitting man to kill. War means that we have to kill people. That's all there is to it. It is a sin not to kill if we are serving on God's side. There is no other way to win. Wars must be won for God's sake. He has a part in every war! The quicker we can kill the enemy, the quicker we can go home and listen to the pulpit killers tell us what we did wrong. If it wasn't for us, those pulpit idiots would be shot for standing in their own pulpits. Our task is to kill the enemy before we are killed."...

Many accused Gen. Patton of loving war. In fact, the Patton movie script had him saying, "I love war!" Gen. Patton did not love war, but he had the courage to face the truth that all there is to war is killing people. Gen. Patton hated war far more than the "pulpit killers" he condemned. He often quoted the Bible, saying, "There will always be wars and rumors of wars." Gen. Patton hated those military and political leaders who delayed, regrouped, consolidated gains, defended land, dug fox holes, or would permit any act which would prolong the war without any thought of the soldiers on both sides that would die from the delay."

From: Chapter 5, Principle for Making Decisions, subheading, 'When at war we must kill people.'

As Patton said, people tend to quote the parts of the Bible they like. This is true for all religions. When sacred texts talk of peace and harmony, they are referring of the need to 'love thy neighbor' and to be the non-agressor; but when attacked there is the need to defend liberty, freedom and Peace. When the Great Master and other teachers speak of 'turning the other cheek,' being 'peaceful' and 'non-violent'; what they are saying is that one's emotions should not be violent or filled with hatred and anger when defending life.

Many might be surprised to learn that "Thou shalt not kill," is a deliberate mis-translation. The original statement from God on Mt. Sinai was "Thou shalt not murder." Big distinction but very convenient for the forces of evil that want good people to stand by and do nothing. Most people who cry 'Thou shalt not kill' probably don't believe in most of the other commandments anyway.

It is hypocritical to cry "Peace! Peace!" —When there is no Peace! Freedom is being trampled throughout the world. Without America and Americans like Patton, the criers of peace will be dead along with any recognizable form of Religion or Democracy.

Another Article on Patton by Reverse Spins:

Patton, The Second Coming of Hannibal

Another article on pacifism by Reverse Spins:

On Pacifism and Buddhism

back to: Varieties of Spiritual Thought,

back to: One Solution to the World Crisis,