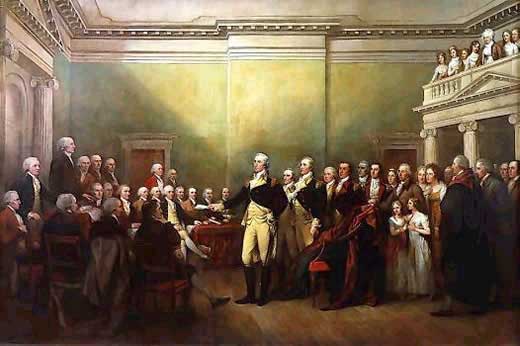 The Crown of America

From Bloodline of the Holy Grail: The Hidden lineage of Jesus Revealed by Laurence Gardner, pp. 347-348.

From the Editor @ Reverse Spins: The author makes the case that Charles Edward Stuart of Scotland (Bonnie Prince Charlie) is a descendent of Jesus. He believes that George Washington made overtures to Charles Stuart to become the Monarch in the American Republic, implying that George Washington knew that he was a descendent of Jesus. I do believe that Jesus did have descendents so it is an interesting supposition.

I have one big problem with these type books, Holy Blood, Holy Grail, being the first. They tend to focus on a flesh and blood mentality, laying too much stress on the bloodline. They are looking for a 'savior' just as in Christianity which is ironic because they are anathematized by Christians.

The symbology is the most important, the blood is the Holy Spirit, the Grail--the Christ chalice within the heart, in other words we are all Sons of God and intended to put on the mantle of Christ.

"A popular alternative to absolute monarchy or dictatorship has been found in Republicanism. The Republic of the United States was created primarily to free the emergent nation from the despotism of Britain's House of Hanover. Yet its citizens tend still to be fascinated by the concept of monarchy. No matter how Republican the spirit, the need for a central symbol remains. ..."

"For the most part, those responsible for the United States' morally inspired Constitution were Rosicrucians and Freemasons, notable characters such as George Washington, Benjamin Franklin, Thomas Jefferson, John Adams and Charles Thompson. The last, who designed the Great Seal of the United States of America, was a member of Franklin's American Philosophical Society--a counterpart of Britains's Invisible College. [Originally the Royal College, then forced underground. Some of its members were alchemists, Templars, Masons and believers in the bloodline of Christ.] The imagery of the Seal is directly related to alchemical tradition, inherited from the allegory of the ancient Egyptian Therapeutate. The eagle, the olive branch, the arrows, and pentagrams are all occults symbols of opposites: good and evil, male and female, war and peace, darkness and light. On the reverse (as repeated on the dollar bill) is the truncated pyramid, indicating the loss of the Old Wisdom, severed and forced underground by the Church establishment. But above this are the rays of ever-hopeful light, incorporating the 'all-seeing eye', used as a symbol during the French Revolution.

."In establishing their Republic, the Americans could still not escape the ideal of a parallel monarchy--a central focus of a non-political, patriotic attachment. George Washington was actually offered kingship, but declined because he had not immediately qualifying heritage. [there are probably other reasons as well, editor]. Instead he turned to the Royal House of Stuart. In November 1782 four Americans arrived at the San Clemente Palazzo in Florence, the residence of Charles III Stuart in exile. They were Mr Galloway of Maryland, two brothers named Sylvester from Pennsylvania, and Mr Fish, a lawyer from New York. They were taken to Charles by his secretary, John Stewart. also present was the Hon Charles Hervey-Townshend (later Britain's ambassador to The Hague) and the Prince's future wife, Marguerite, Comtesse de Masillan. The interview--which revolved around the contemporary transatlantic dilemma--is documented in the US Senate archives and in the Manorwater Papers. Writers such as Sir Compton Mackenzie and Sir Charles Petrie have also described the occasion when Charles Edward Stuart was invited to become 'King of the Americas'.

"Some years earlier, Charles had been similarly approached by the men of Boston, but once the War of Independence was over George Washington sent his own envoys. ..." end 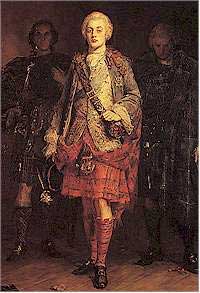 The son of James Francis Edward Stuart and grandson of James II of England, Charles Edward was born December 31, 1720, in Rome. In 1744, after his father had obtained the support of the French government for a projected invasion of England, Charles Edward went to France to assume command of the French expeditionary forces. Unfavorable weather and the mobilization of a powerful British fleet to oppose the invasion led to cancellation of the plan by the French government. Charles Edward persisted in his determination to drive George II from the British throne, however, and in 1745 he arrived in Scotland, where a number of Highland clans came to his assistance. He took Edinburgh, defeated a British force at Prestonpans, and advanced as far south as Derby, England, before being forced to retreat. In April 1746, however, his forces were utterly routed at Culloden Moor. He was hunted as a fugitive for more than five months, but the Highlanders never betrayed him, and he escaped to France in September 1746. Two years later he was expelled from that country in accordance with one of the provisions of the second Treaty of Aix-la-Chapelle (1748), which stipulated that all members of the house of Stuart were to be driven from France. For a number of years Charles Edward wandered about Europe. Secretly visiting London in 1750 and in 1754, he attempted without success on both occasions to win support for his cause. In 1766, on his father's death, Charles Edward returned to Italy, where he spent his last years. He died in Rome on January 31, 1788.

Bio of Charles Stuart from: http://www.scotlandvacations.com/stuart.htm

Bloodline of the Holy Grail