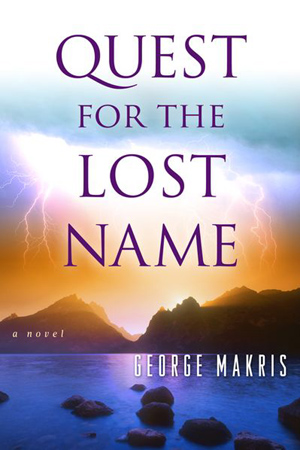 Quest for the Lost Name
by George Makris

The Lost Name is not lost. It's been copyrighted. I jest, but there is always some truth in a good joke. As the title of the book implies, there are mysteries out there that have been hidden. They have been for a very long time. Sometimes it is by necessity, the populace or the initiate may not be ready. Other times we're ready but the priests have decided to hold on to these secrets because 'they know best.'

The author has pried open the vaults of the priest class and released the inner teachings. It's a Masonic thriller on guarana/acai juice. And most of all it's a guidebook to the Path of Initiation and the Journey of the Hero. Lots to be gleaned from in this book which is not only for the neophyte but also for the advanced soul.

Released just in time for 12/21/12, the hero has to pass a series of tests so that he can muster the spiritual power to stop the karmic hammer that is starting to descend upon an unsuspecting populace. The initiations come fast and furious, almost to fast. But the initiate capably meets every challenge. Sometimes I wondered if he was up to it, because he's somewhat of a knucklehead. Especially, when it comes to the opposite sex. The main character suffers from a mild form of infantile dysfunction. If I was a woman and that dude's twin soul, I'd want to slap him upside the head a few times. Part of his problem is that his humor falls flat a little occasionally.

Fortunately, his love from Atlantean days stands by her man, and overlooks his shortcomings. If she can, I guess I can too. The two travel all over the globe, from D.C. to the Tetons, to India and Tibet deciphering clues to the Lost Name. A sinister group of dark individuals is on their trail and sometimes one step ahead of them. Our heroes are not alone however, the secret brotherhood of light is always there to assist them. The spiritual battle on astral planes between the players is fearsome to behold and an interesting lesson for the average reader. Sometimes evil manifests itself unexpectedly. We see it in the papers. This book gives you a glimpse of the thought forms and demons that lurk in the shadows. But be of good cheer they can be vanquished. If you seek it, The Quest for the Lost Name shows you the way.

This is a welcome addition to any fictional metaphysical library. Most esoteric novels are pabulum for the outer personality. The Quest for the Lost Name is meat for the soul.

You can buy the book and read more about it here:

Return to The Best of Esoteric and Metaphysical Literature