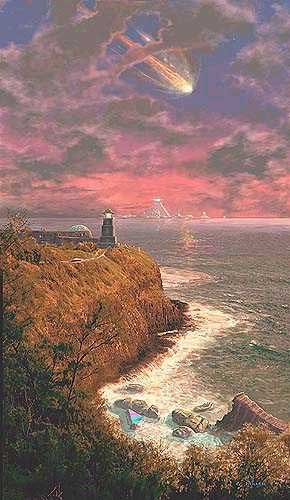 Prophecies from Phylos the Thibetan

Editor, Reverse Spins: Written in 1886 by Frederick S. Oliver, amanuensis for Phylos, who transmitted this book from higher planes. Many books of this type are often times suspect. I believe this book to be one of the most accurate ever received. If you want to know about Atlantis, then this is the one to read. These prophecies were given over 100 years ago and are found at the end of the book. Consider this, the controls and degradation Phylos talks about here have, for the most part, gotten worse not better. These prophecies may seem dire, but there is a solution: walking in the Master's footsteps.

"Many have been my references to America as being Atlantis come again; much hath in a general way been said of the beginning, rise, growth and destruction of that ancient prototype; a hint hath been here and there given, rather by inference than by specific statement, that while America should peer and even more than Atl [Atlantis], just because she is Atl returned on a higher plane, she must endure the woes as well as retrace her pre-carnate glories. ..."

"During many, many centuries prophecy hath looked forward to the end of the Age as a time of awful woe, and has pictured dread scenes of terminal horror. Am I come to say that all these predictions shall fail? Is the book of the Apocalypse mere allegory? Would it were! But the Poseid age [the last Atlantean civilization] was stricken, this one must also be which has just passed. Shall America, the Glorious, together with the rest of the world, meet similar woe? Alas, worse, though not by water but by fire. ..."

"Man is his own judge and executioner. Man is the type and the universe is the print; Nature patterns after Man, not Man after Nature. He, being of free-will, hath brought all coming woes of judgement to be inevitable; he must endure, as he hath sown; so must he reap. O Man! Forgetter of Love, of Mercy, of Right; breeder of Hate, of Cruelty, and of the inhumanity that hath and still doth make countless millions mourn, is it possible that thou hast been blind to the handwriting on the wall? Alas, yes, thou hast! Rampant is the Spirit of selfishness, of greed, of merciless gain; its hand guides the trains and steamers, clicks the telegraph keys, operates the telephone and cables, makes a mockery of free speech, shackles the press so that it dares to utter only that which cannot offend its master; every human enterprise, all national policies and international comities, all things, even the churches, are willing vassals to this fiend, SELF. ..."

"This inhuman picture is the rule, not the exception. Thou knowest this full well. I state nothing new in this regard, and the awful facts are underdrawn instead of exaggerated. All of this, although in far, far less degree, has been so at the ending of every age, was so in Poseid and is therefore now repeated. But it can never be so again after this for HERE THE WAY DIVIDES. Poseid survived; so also shall they of the Sixth Age. In the full time by fire the Reaper shall reap, and no place be found for physical safety by the unchanged of heart. But the time of it shall be foreshortened, else no flesh could remain alive. Satan from under! The roar of armed hosts must succeed the thunderous mutterings of the times. No more is there any chance to prevent the coming retribution (albeit it may seem unduly deferred), for the causes have had their way. Too late is it to even modify the result of the misguidance of that Spirit whose hand sways the helm. A short but sharp conflict, sanguinary past belief, even now reddens on the horizon. The trained armies, millions of men active or in reserve, that are now engaged in conquest, fevered with war, will but little longer, comparatively, submit to having themselves and loved ones ground under the heel and strangled by the hand of that organized thing, Capital, which, itself merely the natural fruit of selfishness, none the less is a riotous animal principle, compelling the few to be masters of the many, denying the God-born declaration that all men are created free and equal, and warping it to seem a giant lie. Soon millions of trained soldiers will turn upon the visible representatives, the wealthy and worldly prosperous, who in reality are not more responsible than will be their assailants, of that Relentless Force behind all human enterprise. Later they will break up into lawless bands bent on satisfying Ishmaelitish [Ishmael was the son of Abraham who was sent away and later became the progenitor of the Arab race] tendencies, each self-server's hand weaponed against his fellow creatures. Then will the pent-up hate, the savagery and selfishness begotten by ages of selfishness ruled by unbridled animalism break in a storm such as the world hath never yet seen, no, not during all the ages I scan, ages forgotten for untold thousands of years. That loveless conflict will initiate that which, Nature completing, will leave living one where now are many. Hard and fast after the human conflict will come pestilence unparalleled, sweeping the wide earth over, for in that day none will pause to bury the slain until the evil is wrought, nor then, for the dead of the plagues will be as thousands for every one by violence. And all this because the love that should grace and soften men's hearts, each for all and all for each, dried up and became a mockery in the close of the ended cycle, leaving by scattered oases, few and far between. Nature follows Man. Wherefore the waters of Earth will dry out, rains be withheld, cyclones sweep, and an earthquake come such as was not since man was on the earth; aye, I am mindful of Poseid. But all of this will occur only through natural causes, and in consonance with the selfishness, lust, greed, anger and general depravity of the Type. As these blaze in the human breast, so shall the air, dry and vaporless under brazen skies, develop solar heats more fierce than history ever knew. A parched earth, furnace-like, piling all flesh mountains high; pestilences stalking unchecked. O ye! Blind to the Handwriting on the wall, which flickers still, though writ for a spent cycle. Turn now and read, while yet the last midnight stroke reverberates.

"The disciples asked the Great Master, saying: "Teacher, when will these things be?" And He said: " ... When you see surrounded by encampments the Jerusalem, then you may know that has come near the desolation ... For days of vengeance these are, to be fulfilled of all the judgements."

"Friends, know ye the meaning of the name Jerusalem? That it meaneth "Vision of Peace?" Verily, so it doth. One by one during the years all the signs of the end of the Age but one were fulfilled; but these were "only the beginning of sorrows," for still the Spirit of Liberty abode here and there in the breasts of lovers of their fellowmen. The Spirit wrapped itself in the glorious folds of the Stars and Stripes and proclaimed the imperishable declaration of human equality, granting unto all that freedom which Americans for themselves demanded. But now the "Vision of Peace" is finally encompassed by armies, the last gap being filled with blue-coated soldiers forcing Mammon's commercial shackles upon alien peoples in tropical islands. Ah, the Starry Flag droops mournfully low above the freedom-birthright sold for a mess of pottage. My People, O my People! As ye have sown, so must ye reap. The Vision of Spiritual Peace is wholly clouded by the dust of armed camps, and no gap is left unobscurred. "The shall the end come." A Son hath continually called from on High:

"Stand from under! Get into the shelter of that Cross:"

"In all the expiatory time must indeed those who thought no wrong suffer? Ah, thought no wrong. In every life, whether theist's, atheist's or merely one ignorant of any doctrine of belief, there comes a time when the inward Spirit beseeches the soul to go up higher. It pleads again and again and yet again so long as faintest hope remains. Ommission too, hath its penalty: "How shall we escape if we neglect so great salvation?" echoed throughout the past Age. Fire burns a babe's fingers as badly as it does and adult's. There shall not suffer, not even though bodily death overtake them; they have no Karma to expiate.

"What is the Cross? What is Christ? I have said, long ago, but I will re-state it: the Divine stream of Life, the Indefinable God, that is the long arm of the Living Cross. Directed, purposed Human Will is the short arm. This will power is our call upon His Name that is never denied. Jesus, the Man of Nazareth, gave us pattern. He sacrificed self for us. He said: :Follow me." Also: " if any man will come after me, let him deny himself, and take up his cross and follow me." ..."

A Dweller on Two Planets, by Phylos the Thibetan