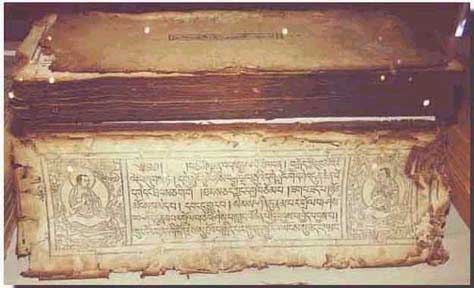 There are stacks of Tibetan books in every room but the kitchen of E. Gene Smith's house here. Many are centuries old, and from the looks of things they are practically nudging Mr. Smith out the door.


The books are just a fraction of the 12,000 volumes of Buddhist and Buddhist-influenced literature that Mr. Smith began to collect in 1965, when he first went to India and found work in the Library of Congress office in New Delhi. Most of the books were brought by refugees, who had carried them over the Himalayas in their flight from the invading Chinese. Scholars say Mr. Smith's collection of Tibetan literature may be the biggest in the West or even in the world. Universities covet his books, he said, but he has no plans to sell his library.


Instead, he and a few employees of the Tibetan Buddhist Resource Center, the nonprofit organization he founded and directs from his home, are trying to have every one of the hundreds of millions of pages scanned onto a computer and made retrievable at no cost on a Web site (tbrc.org). The task should take at least five years, Mr. Smith said.


The collection includes "everything under the sun," said Tashi Tsering, a scholar from Dharmsala, India, the home of the Dalai Lama. "Buddhist philosophy. Some of the earliest examples of biography and autobiography in the world. Mathematics. Alchemy. Travelogues - Tibetans were great travelers and fond of writing about their experiences. A lot of great visionary writing."


There are also volumes of intensely romantic and ancient exotica. "The funeral rites of Kublai Khan," Mr. Smith said, pulling one out. "This is one of the earliest Tibetan wood blocks, printed sometime between 1294 and 1304. And over there, a complete set of the biographies of all the Dalai Lamas, from the 14th century to the 20th."


Mr. Tsering said Mr. Smith, 65, has put "all his energy, all his money into this. That's why he doesn't own a house at his age." Mr. Smith agreed, saying: "I have no kids. I didn't have to send them to college. So really, all my money went into books."


Mr. Smith was introduced to the language and literature of Tibet as a student at the University of Washington. "I was looking for things that would keep me out of Vietnam," he said. "I wanted, more than anything, to stay out of the war." Young men studying obscure languages could receive draft deferments, so Mr. Smith took Mongolian and Turkish, and - when a Tibetan lama, or scholar, came to teach - Tibetan. From the lama, whose name was Deshung, Mr. Smith learned about the philosophy and world view of Tibetan Buddhism. "He was the most logical person I have ever encountered," Mr. Smith said. "From him, I learned that truth is true only within its system."


Eventually, Mr. Smith, who was reared a Mormon, converted to Buddhism. Deshung, he said, "was passionate about books. It was his passion, and it became mine." After five years of graduate study, the lama suggested that Mr. Smith go to India. "We had no Tibetan books," Mr. Smith said. "Deshung said: `Go and find them. Find the important books and get them published.' It was his idea, really."


Experts said the books Mr. Smith found and had published through the Library of Congress eventually became the foundation of Tibetan studies in the United States. "He was the first Tibet expert. He literally made Tibetan studies possible," said Donald Lopez, the chairman of the Asian languages and cultures department at the University of Michigan.


The Tibetan refugees carried books that had never been available in the West - "a vast and self-contained world of literature," said Elliot Sperling, a Tibetan professor at Indiana University. "Tibetans have a great reverence for the written word. It was a very literate civilization for 1,000 years and produced a massive amount of literature."


In his work for the Library of Congress, Mr. Smith acquired copies of ancient Tibetan books and distributed them to American universities and libraries. But acquiring a full range of Tibetan books required detective work and a sweeping knowledge of the literature. There were no printing presses in Tibet. Books were hand-written or printed from wood blocks and kept in libraries in monasteries - the centers of learning - and in private homes. But there are no catalogs or comprehensive book lists. Each of the four major sects of Tibetan Buddhism also has its own significant literature.


After the Chinese invasion, Mr. Tsering said, books were "scattered everywhere." "You'd have to know which are rare and important in all four major schools," he said. "Otherwise, you'd wind up collecting all the regular, well-known books."


Mr. Smith consulted with many refugee lamas, including the Dalai Lama, on the most valuable texts and sent researchers to the farthest reaches of India and Nepal to hunt for them. In the process, his knowledge of the literature became "phenomenal, encyclopedic," said Derek Kolleeny, a Tibetan translator from Westchester County and a board member of the Tibetan Buddhist Resource Center.


Eventually, Mr. Smith became the field director of the library's New Delhi office - and much later of its Indonesian and Cairo offices. His house in New Delhi became a mandatory stop for students attracted to Tibetan studies.


Mr. Smith, now retired, plans to move in a few months to New York City, where the Rubin Cultural Trust has promised to provide him offices. There will be room, he said, for piles of books now in storage and for new ones - long missing and assumed to be destroyed - that have been found by the hundreds in recent years.