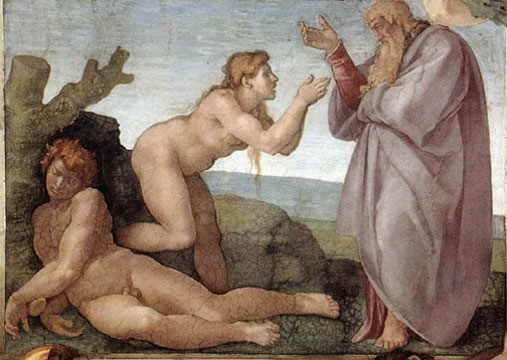 The Myth of Original Sin and the Fall of Woman

Guess what—the original sin was not about sex and Eve was not the first to fall, nor even Adam. Why has this myth persisted through the centuries? Because there are seen and unseen forces rampant throughout history whose very existence depends on keeping the people ignorant of the Light within; their Christ potential and the path of the Buddhas and Yogis. If we persist in thinking we are poor miserable sinners at conscious and subconscious levels, we will never rise up to become the Son or Daughter of God we are intended to be? Oh!, but it feels so good when the preacher stops beating us over the head with his Bible.

The clue to this mystery of cosmic history lies in the proverbial saying, 'pride goeth before the fall.' According to esoteric teachings,* there have been many life waves or a series of large groups of souls that have embodied and reincarnated through countless millennia. The first of these 'root races' lived very close to God at levels beyond what we know as the physical today. Their existence was so ethereal that not a trace of tangible evidence remains today. Sacred texts hint at their existence and clairvoyants catch glimpses of these former Golden Ages.

During the time of the fourth root race, the fallen angels came to try and subvert the Earth. Long before Earth fell, Lucifer rebelled in heaven because of pride. He did not like taking orders from souls in embodiment on other planets. After all, he sat at the 'right hand of God' and was better than them. He forgot that Angels are supposed to help man. He also noticed that some planets were a little behind schedule on their spiritual progress. He thought he could do better than God. God seemed to be indifferent in His administrative duties. This freewill business was getting out of hand. This was the first act of sin that affected all others. 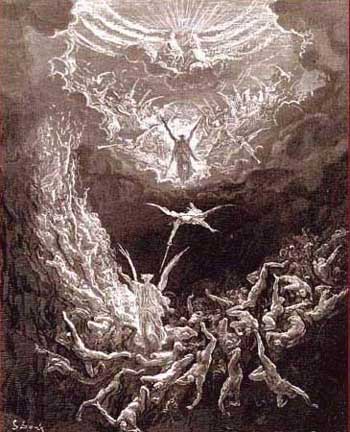 Casting Down of the Rebellious Angels by Gustave Dore'

Lucifer convinced one third of the angels including a cast of characters well known in some circles as: Satan, Beelzebub, Serpent, Belial, Baal, etc., to throw their lot in with him. These fallen angels are all distinct entities apart from Lucifer. They came to Earth over four million years ago and subverted the High Priests of Eden on the continent of Lemuria or Mu. There were some High Priests who had those same seeds of pride, a peculiar affliction of the intellect and a lack of discernment in the heart. They were easy pickings for the wiles of Serpent and Satan. They bought the lie that God did not care, that He wasn't really needed and that maybe He wasn't real anyway. This was the second sin and the original sin on Earth. To be fair, the High Priests might not have known that Lucifer had fallen. They might have been fooled by the gloss and patine of his angelic aura. But they should have known his fallen and rebellious condition by his vibration.

The fall of Earth was gradual. The polluted consciousness eventually infected the rest of Earth's inhabitants. This descent was hardly discernible to the vast majority. Earth sank to such a low level of existence that spiritual awareness was all but snuffed out. Mankind was in danger of entering a new low—the caveman era. A place was set aside for an attempt to bring back the Edenic consciousness.Two souls volunteered to walk the Spiritual Path at etheric levels in a place called the Garden of Eden. It was an idyllic setting, protected from less advanced evolutions elsewhere on Mu. Remember; when Cain killed Abel, he was sent out to find a wife away from the Garden of Eden. A fact conveniently glossed over by so called Biblical scholars. Cain went to the remnants of the former advanced civilizations of Lemuria to find a mate. Adam and Eve were not the first souls on Earth, they had neighbors albeit distant ones.

Lord Maitreya was the Ascended Master who sponsored the Garden of Eden and the two souls willing to enter the Christic initiations to get back to the God Consciousness known in the Golden Ages. Adam and Eve, twin souls, took a semi-physical form at etheric levels. They were accompanied by many other twin souls who agreed to follow the same path. Eve was not necessarily created second and she certainly was not a second class citizen. No, the concept of her coming from Adam has more to do with Spirit coming first, represented by Adam, then the Matter plane or mater, Eve, is infused with the Light of Alpha or Adam; creating a place and physical temple to live in.

There were two trees visible to Adam and Eve. They were the Tree of Life and the Tree of Knowledge or the Tree of Knowledge of Good and Evil. They were not actual trees but instead a kind of spiritual tree that at etheric levels we all look like. If you recall, Jesus healed a blind man and the first thing the man said was. "I see men as trees, walking." (Mark 8:24) A very unusual thing to say, to say the least. Jesus had healed his third eye or spiritual sight in addition to his eyes, then touched him again giving him normal sight. I suspect the chap lost his spiritual vision. God bless him though, he left a record and important key to spiritual awareness. What he saw and what Adam and Eve saw and had direct contact with, is what you see in the picture below

To bring Earth's evolutions back to Paradise and the Edenic consciousness, Adam, Eve and the rest, had to pass certain initiations of Christic awareness. It was a logical progression of tests like a ladder up the spiritual staircase. Pass one and its on to the next rung. They were given these initiations by Maitreya in one of the very first Mystery Schools on the Planet, if not the first. Serpent, being a fallen angel on the yellow ray or second ray of wisdom, was well aware of the tests they had to go through. He came as an impersonator of Maitreya. We all have to take these very same tests somewhere along our Path. The serpentine logic, the rebellious consciousness of the fallen angels and hence our own not-self or Dweller on the Threshold has to be defeated by us. We can ask and receive assistance by heavenly hosts and most especially by Jesus, but ultimately we will have to undo what we have created through many lifetimes on our own. God will give us the tools to do so. 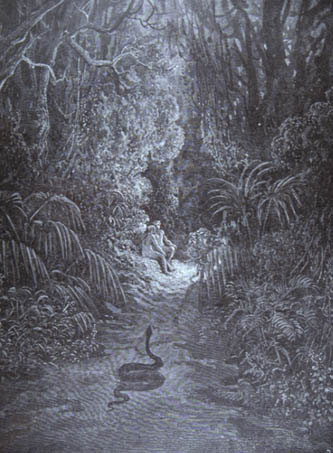 He gave the initiates at the Mystery School all the support they needed. They were not working on their personal Dweller however (they hadn't had time to create one), they were trying to overcome the planetary Dweller, a portion of the not-self of all Earth's habitants. Rather than being the first to fall, Eve and others, were trying to undo the effects of the fall of several men (the high priests on Eden) and all those that fell afterwards. The 'Lord God' (the name for Maitreya) told them not to eat of the fruit from the Tree of Knowledge. The serpent whispered in their ears that they 'would not surely die.' In other words, they could shift their attention from the God Presence and view 'all God's creation' without being affected. The only problem was that not everything on Earth was created by God. There was inequity and astral forces. But, after all, what's the harm, a little pleasure can't be a bad thing, everything in moderation. Eve believed the lie through the false pride of the fallen ones that she was further along on the Path than she actually was. They were God's 'chosen' weren't they. Accepting this logic, she beheld the lower planes of existence before either of them was ready, before they were firmly ensconced on the Christic path. She was no longer one with God. Duality reared it's ugly head for the first time in their lives. They saw they were naked before God not physically but vulnerable and exposed to the karma they just made and will be making from then on. It must have been a grim scene.

Since both were brand new souls on planet Earth, Adam having the stronger Alpha tie to Spirit might have felt a little more comfortable in his etheric, semi-physical skin. Eve, embodying the Mother flame was tethered a little more to the matter plane, therefore susceptible to the curiosity of all that the matter plane has to offer. Today however, because man has a more natural affinity for the etheric planes, by divorcing himself from Spirit, he is more adrift. Woman, more at ease with the spiritual nature of the matter plane, the divine feminine and the spiritual essence of the Mother flame; is more inclined to the Spiritual Path and needs to hold the vision for man of his true spiritual nature. If she drags his attention downward to the lower chakras by her dress, actions and consciousness, then we're all going to be on this planet a lot longer than need be.

Adam, loving his twin soul with a love for the ages, did not want to leave his beloved alone in the predicament she now found herself. He joined her and hid from Maitreya, in shame for their failure on the Path. The failure was not about sex or the base of the spine chakra but about the misuse of the chakra at the nexus of Alpha and Omega energies, the heart. By not listening to the inherent logic centered in the heart, the choice was made and the energies descended. At the extreme end of this polarity is the base of the spine chakra. By entering into a state of duality, the energies no longer flowed freely back to God. As a by-product, the sexual urge increased as the light became lodged in the lower chakras. Their physicality became palpable. The awareness and desire for sex was unavoidably intertwined with their newly created debased feeling world.

Without knowing the cause behind the effect and believing the lie that we are not Sons and Daughters of God , heir to His Kingdom; it is only natural to assume that sex is somehow connected to the fall. Sex is only a natural consequence of evolving on this planet. Eve and woman have carried this burden of false condemnation long enough. It is time to become whole and realize the Divine Feminine in all.

*(Theosophy, I Am Movement, Bridge to Freedom, Summit Lighthouse)

Links to Books at Amazon.com that provide some of this information:

The Secret Doctrine by Helena Blavatsky

The Lost Continent of Mu by James Churchward

The Children of Mu (no picture) by James Churchward

The Lost Teachings of Jesus 4 by Mark and Elizabeth Prophet

Climb the Highest Mountain by Mark and Elizabeth Prophet

The Path of Self Transformation by Mark and Elizabeth Prophet

Fallen Angels and the Origins of Evil: Why Church Fathers Suppressed the Book of Enoch and Its Startling Revelations by Mark and Elizabeth Prophet

Man, His Origin, History and Destiny by Werner Schroeder, (no picture) at: Ascended Master Teaching Foundation

More on Lemuria and Atlantis at Reverse Spins:

Other articles of interest here at Reverse Spins:

back to Varieties of Spiritual Thought, or The Rosary Page, or Alternative Archaeology