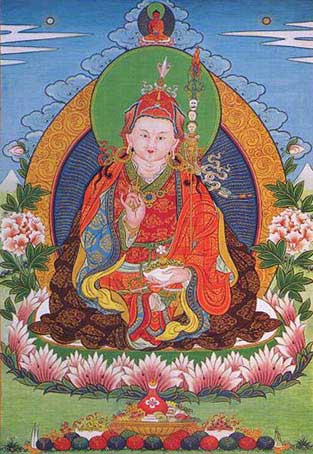 "Where—are—my—tertöns? The definition of tertöns, beloved, is "those who reveal the hidden treasures"—those who revealed the treasures of the teachings. ... Yes, I call you forth from the ancient centuries when we have served together, and out of those centuries I bring you the teachings of the great Buddhas and the violet-flame Buddhas and ruby-ray Buddhas, beloved. ... in honor of Saint Germain and his great service to mankind, I open the treasures for this century and beyond, beloved. ... I am no longer the eighth-century Padma Sambhava that you envision, for I have moved on down the centuries to the present hour. And therefore I am a modern Buddha in your midst. Know this beloved. ... Thus I, Padma Sambhava, look now to the Middle East and to the Far East and I see the billions of souls who must have the violet flame. ... Now is the hour when many souls can at last take their ascension. But they need a spin, and the spin they need is the violet spinning flame. I enjoin you, then, to unveil the sacred treasure. Reveal it, beloved, to all who will listen and learn to give the violet flame mantras. Let them know that the most sacred treasure of all is the violet flame crystal, the violet flame mantra, the violet flame blazing in their hearts, transmuting records of karma and cleansing all life in answer to their calls." Dictation by Padma Sambhava through Elizabeth Clare Prophet 10/30/94 © Summit Lighthouse

If you notice in nearly all major religions there is no progressive revelation. The message begins and ends with the original prophet or messenger. Even in Christianity, the Book of Revelations is considered an anomaly—not a precedent condoning future revelations (except by Jesus himself). A curious phenomena don't you think? Because of Guruyoga, or the direct transmission of secret teachings, this is not the case in Tibetan Buddhism although most westerners do not really fully understand this. Sitting in a question and answer session with a Rinpoche one day, I was amazed at some of the questions by the audience. Some long time practitioners held the concept that the Buddhas were in some far off nirvana—some distant untouchable place—where they rarely take notice of us mere mortals. Nothing could be further from the truth. They are present and ever ready to help mankind.

Why would we need tertöns or termas (hidden teachings)?

It's simple. The further removed from the source, the more diluted and distorted the original message becomes. An obvious case in point is all of the gnostic gospels and other interesting facts about Jesus, his life and teachings coming out in the last hundred years. We were not getting the whole story. There were mysteries that Jesus taught in the upper room that we have been deprived of—sometimes on purpose. Less obvious is what has happened to Buddhism. Buddha came because Hindus were being caught up in materialism and looking for God outside of themselves. He stressed the God or Buddha within. But even Buddhism is not immune from permutations over time. The lesser self and the carnal mind has always tried to take Buddha's message and dilute it. Add the impetus of malefic forces over the centuries continually putting top spin on the original release and you have a distorted message spiraling downward. What was the spin they emphasizied in Buddhism? Focus on the God within and not the ones who have already achieved enlightenment and made their ascension. Most Buddhist schools or lineages have become intellectualized. Misconceptions in Zen Buddhism is the most obvious example. The concept of "God" is often tmes sidestepped, even by the highest lamas. An abstract theology that allows all sorts of behavior and sophist thnking has taken over. It's one of the reasons Buddhism has become popular in the west. Much of Buddhism and meditation has become self-centered and self-absorbed and in extreme cases, almost nihilistic. A sad state of affairs when you consider all of the Bodhisattvas and Buddhas that are waiting for a prayer to help mankind. Not even buddhist mantras or prayers themselves, are fully understood. If one does not expect a Buddha to come out of Nirvana to help, is that mantra going to have the force of will and feeling to reach that Buddha?

It's a curious thing, many people consider ancient languages such as Sanskrit and the words they contain, imbued with mystical powers. This is a little bit superstitious. While it certainly is true that thousands of years of saying certain mantras e.g. the AUM, adds a momentum and spiritual energy behind the words, it is not an exclusive phenomena. Masters lend their attainment to the giving of their mantras. And if you accept progressive revelation, then as Guru Rinpoche says above, "... the most sacred treasure of all ... is the violet flame mantra." This is so because the heirarch for the Aquarian Age is Saint Germain and he has given a dispensation to mankind that allows them to fulfill the mission of Jesus Christ. The Piscean Master has lifted our burdens for 2,000 years—not washed our sins or karma away—but held them in abeyance until we were spiritual ready to take them back. Now we're finally ready. With the violet flame they can be washed and scrubbed away.

If you notice in the quote at the top, Padmasambhava is not asking anyone to join an organization. He just asks that the violet flame reach people in other religions. It's okay to remain a Tibetan Buddhist or Hindu and still give violet flame mantras. Don't take my word for it or Padamasambhava's, try it for yourself. Give the two decrees below of Saint Germain for at least 15 minutes; 7 1/2 minutes for each one. Visualize yourself bathed in violet fire and give this invocation as an introduction:

In the name of the Buddha and the Christ, I call on Saint Germain, Padmasambhava and all the violet flame Buddhas to flood the world and myself with oceans of violet flame. I ask that you transmute the following conditions: _______________________. Please multiply these decrees by all the dispensations from your heart flames, I thank you and accept this done according to God's Holy Will:

If you have a mala handy, what would be better than sealing the session with Padmasambhava's Vajra Guru Mantra a.k.a. The Golden Mantra (above) for 108 times, or once around the rosary beads. Here's what he told Yeshe Tsogyal about this mantra. The explanation is a terma as well, since it was not discovered until the 14th century:

" ... If this mantra is recited a hundred times a day, merely a hundred times a day without interruption, one will become attractive to others and will effortlessly come by food and wealth and the necessities of life.
If one recites it a thousand or ten thousand times on a daily basis, one is able to literally overwhelm others with one's brilliance, in the sense of becoming very charismatic and influential in exerting a positive influence over others, and one will gain unhindered force of blessings and spiritual power. ..." from rinpoche.com

One final word, as it says in the Bible, "God is no respecter or persons: But in every nation he that feareth him, and worketh righteousness, is accepted with him;" in other words, God or Padmasambhava in this case, could send his tertöns to re-embody anywhere, even right here in the United States. Such was the case when Padmasambhava revealed in a dictation that Elizabeth Clare Prophet was Padmasambhava's chief disciple, Yeshe Tsogyal. This was confirmed by a visiting Rinpoche, Bangri Rinpoche, when he recognized her as the former tertön, Princess Tsogyal. By the way, when Bangri Rinpoche returned to Tibet to help children, he was arrested along with his sister and put in prison . They remain there to this day and could use your prayers. 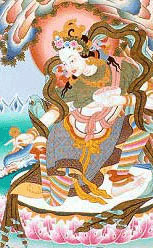 Why did Padmasambhava send his chief disciple to America? I think it's obvious. Look what happened to another of his tertöns, Bangri Rinpoche. Tibet is no longer free. Saint Germain helped found America (1, 2, 3 ) so that freedom of religion might be safeguarded for all faiths and mystical teachings. The three of them, Padmasambhava, Yeshe Tsogyal and Saint Germain, have returned once again to bring us, the "most sacred treasure of all—the violet flame."

Other things of interest here at Reverse Spins: