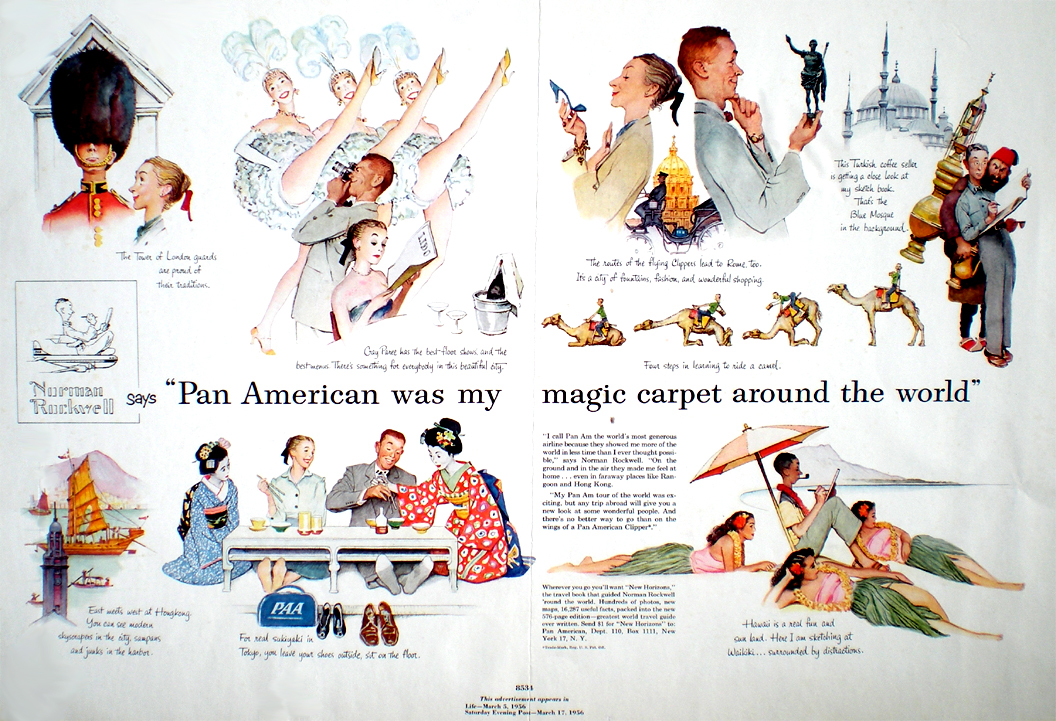 Norman Rockwell called it his worst fiasco ever; but to my father it was a wonderful memory that lasted forever. My dad was an art director at J. Walter Thompson, one of the biggest, if not the biggest Ad Agency in New York during the fifties. They had the Ford and Pan Am accounts among others. J. Walter and Pan Am wanted to make a big splash, so they decided to send Norman Rockwell, a Pan Am photographer (Blackie Kronfeld), and my dad (William C. House Jr.) around the world. My dad's boss, Wally Elton, and his wife accompanied them to Rome. Right from the start it turned sour. As my dad told it, Mr. Elton didn't want local color, he wanted bright, beautiful people. Fortunately for the travelers, Wally Elton was only with them for a couple more cities. But the die had been cast—one of the greatest artists in the last 100 years who had the innate ability to capture all that was good and noble about the subject before him was told to muzzle his creativity. The result after two months of globe trotting was a canned advertising campaign. Only four ads came out. They appeared in magazines like Saturday Evening Post, Life and Holiday. Experiences from an entire country were resigned to a small portion of each ad. Some countries didn't even make the cut. The ad above appeared in Life on 3/5/56 and Saturday Evening Post on 3/17/56.

Here's Mr. Rockwell's story of the trip from his autobiography, My Adventures as an Illustrator as told to Tom Rockwell:

"And then there's advertising. and my most disappointing fiasco. A few years back Wally Elton, a vice-president at the J. Walter Thompson advertising agency, asked me if I would like to go around the world for Pan American Airways. I would visit all the major cities at which the Pan American clippers landed and make sketches. When I returned the sketches would be published as advertisements for Pan American. He explained that he'd thought up the trip because it was so difficult to advertise an airline. Practically all the airlines use the same planes; they all serve about the same food, have pretty stewardesses who give the customers the same courteous service and attention. How, then, are you going to persuade the public to travel by this airline in preference to all the others?

I accepted enthusiastically. The fly showed up in the gravy in London. The first night there I returned to the hotel and showed my sketchbook to Wally. He leafed through the drawings of people feeding pigeons in Trafalgar Square, a railroad station, et cetera. "They're swell," he said, "but they won't sell tickets. You can feed pigeons in St. Louis. Drawings of railroad stations don't sell airplane tickets." "All right," I said, assuming that he wanted me to sketch the people I saw and the strange sights, sort of get the flavor of the cities we passed through. And that's what I did. In Paris, Barcelona, Rome, Istanbul, Beirut, Karachi, Calcutta, Benares, Rangoon, Bangkok, Hong Kong, Tokyo, Hawaii. People from bullfighters and priests, to snake charmers, monkey tamers, Arabs, and Geisha girls. Scenes from a fountain in Rome to a camel-elephant-water buffalo-bicycle-and-beggar-thronged street in Karachi.

But when I returned home and submitted my sketchbook it was rejected. Oh, I did a few ads. Nothing to justify the time and money which had been spent, though. Because the agency and Pan American did not want pictures of the strange lands and people. "Those would only frighten tourists," they said; "we want pictures of smart-looking tourists sunning on smart beaches in front of smart hotels." But that's not the kind of picture I can do. So I did nothing.

I can't understand their attitude really. If tourists want only to sit on beaches, why do they go abroad? Florida's full of fashionable hotels and smooth white sand. And you certainly wouldn't go all the way to Hong Kong or Rangoon to get a tan. But I dare say I'm wrong. Selling tickets for airplane rides is not exactly my strong point after all. And of course I might not have been able to do the kind of ads I wanted to. I'm better in my own back yard, painting my neighbors. Still, it's a shame to waste a trip around the world. It gives me a guilty feeling whenever I think about it. Maybe I'll do something with the sketches sometime.

I'd better. Everywhere I went people asked me, "What are you sketching for?" "For advertisements to appear in all the magazines," I said. Which pleased my questioners no end. "We'll be looking for our pictures," they said. So . . . now I avoid London, Paris, Barcelona, Rome, Istanbul, Beirut, Karachi, Calcutta, Benares, Rangoon, Bangkok, Hong Kong, Tokyo, and Hawaii. If I have any more wide-ranging fiascos like that one I'll have to go live in a closet. That's the story of my flops. There are more but, as I say, I'm very forgetful." (pp. 352 & 355.)

To print the whole article in PDF format go
here, at the bottom of the page.