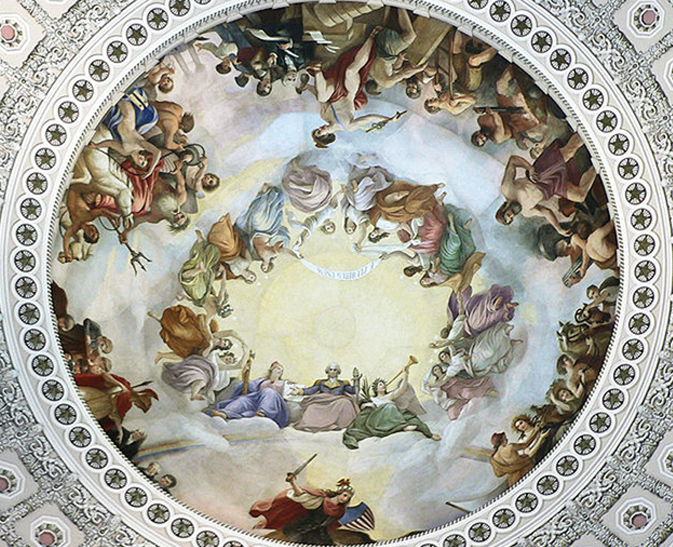 The Apotheosis of George Washington

Don't get me wrong, The Lost Symbol is a fantastic book. Dan Brown has mastered the art of the thriller thereby seamlessly bringing deeply spiritual and mystical teachings to a staggering number of people. In fact, whenever I read a book like this I marvel each time I read a precious pearl of ancient mysteries that drops into the consciousness of the uninitiated—the neophyte who is pondering these things for the first time. It thrills me so, that I tend to overlook some of the creepiness in the book, and believe me there's enough creepiness to satisfy those who need to have their chakras blasted by such extremes. I highly recommend this book to everyone. This won't be a review however, so I won't be giving away any plot here but I will attempt to fill in the blanks.

Since this book is about symbols leading us to answers, let's start with one of Mr. Brown's favorites, the circumpunct

. This has a wide variety of meanings from God and the sun ... to Ra etc. The author makes the case that we have divine potential within us and, for the most part all we have to do is use our minds to tap into it. This is a common belief in new age thinking today and also in some off shoots of major religions, I'm thinking mostly of westernized Buddhism. An important ingredient is missing however. Let's go back to the circumpunct and take it to it's logical conclusion.

Moses said "Ye are Gods," if this is so, then we came from Him first as an undifferentiated substance. As we descended into matter our form which can be seen as similar to the original

, started to differentiate forming the Yin/Yang

. These two halves became twin flames in the etheric realm. We all have one twin flame as well as soul mates (an opposite whom we share missions with). Continuing in their evolution,

these etheric beings take on the Yin/Yang aspects themselves

. As these souls descend into matter sphere of the etheric, they split once again into the four lower bodies

. At the same time, while the four lower bodies were being created, a figure eight flow 8 was also created. Visualize a four lower body above

as in a figure 8. That's your God self above and the lower self below. The nexus is the Christ Self and our connection to infinity. There is only one place in the entire Bible where God says his name. Moses heard I AM THAT I AM. I AM above

and I AM below

. You have an I AM Presence above you. It's that simple. Deal with it. Okay, if you can't here are two other explanations (1 & 2).

Now we get to the missing link. The four lower bodies of man are: etheric (fire), mental (air), emotional (water) and physical (earth). To bring something into the physical as an alchemist you just can't think it into being. There is a path that has to be followed.

Robert Langdon was right when he questioned his friend at the end of the book:

Slowly he raised his eyes again to the Apotheosis. "I have a question," he said, looking back at Katherine. "Even if I could accept, just for an instant, that I have the power to change physical matter with my mind, and literally manifest all that I desire ... I'm afraid I see nothing in my life to make me believe I have such power."

His scientific mind instinctively knew there was a missing ingredient. The path to precipitation begins in the etheric, the mind then brings it down and fixes its attention on it, holding a matrix; but it is the passion of the emotional body that brings it into the physical. And to be a divine alchemist that passion needs to transcend normal human emotions and take on the power of Divine Love to create a 'miracle.' One of the major points of the book is that we have latent god-like powers. To exercise those powers in a responsible manner i.e. like a god, one needs to look to those who manifest such a magnet of Divine Love that heaven itself cannot help but respond to. I'm speaking of course of extraordinary saints, mystics and yogis. There is no one in the last 50 years that exemplifies this more than Padre Pio. The litany of miracles is well documented: bi-location, healings, prophecy, precipitation, levitation ... the list goes on and the list of witnesses is undeniable. Saint Pio didn't just think of these things. It was his devotion to Jesus and Mother Mary that sets him apart. Divine Love was his alchemical key. Padre Pio gave people admonishments on how to become a better person. His number one recommendation: do the Rosary. Which brings us back to the Lost Symbol itself.

Whoa, I've swerved into something here. I've change my mind I am going to expose the most important part of the book. So stop reading now if you haven't read it.

Are you gone yet?

Okay, You've been warned. After searching all over Washington DC for the lost symbol which was supposed to be the key to unlimited power. It was finally revealed that it was actually "the Word." The interpretation from the Masonic Grand Master was that it meant the Bible and that it was buried in the cornerstone of the Washington Monument. Slightly anticlimactic but reasonable given that we were told throughout the book that most of the ancient mysteries are hidden in the Bible. But let me put this out there. Didn't it seem like a bone was thrown to the fundamentalist Christians. The threat to their faith was diminished somewhat. That's fine but a link to the most important mystery was missed. Unfortunately, Robert Langdon, being a skeptic and an east coast sophisticate was not up to the task. He did not see the alternative meaning of "The Word." Some of them just happen to be in the Bible.

Here are the keys he missed:
• from John 1:1:
"In the beginning was the Word, and the Word was with God, and the Word was God."
• And in Genesis:
"And God said, Let there be light: and there was light."
• The Mundaka Upanishad says:
Om- That supreme Brahman is infinite, and this conditioned Brahman is infinite. The infinite proceeds from infinite. Then through knowledge, realizing the infinitude of the infinite, it remains as infinite alone.

If you look at the grid of symbols near the end of the book, the pyramid Δ points to the infinity sign ∞. Brahman is infinite and the Word for Brahma is OM. In the beginning was the Word. In other words, God spoke to create. He used the power of sound to create light and the earth. He might have even said OM or I AM.

Turning the infinity of Brahman ∞ 90°, we get back to the two circumpuncts

stacked as an 8. Through the power of the spoken word and Divine Love we too can pull down the power of God. It can be through the rosary, the AUM, prayers out loud like Pope Leo XIII's prayer or St. Patrick's Prayer, Saint Germain's mantra "I am a being of violet fire, I am the purity God desires," and the many Buddhist mantras. The key is that our feeling world must be pure. This is not an easy feat. Saint Germain wrote extensively on this in Unveiled Mysteries. He even explained how to control electrons.

Many of the Ancient Mysteries are so simple, they are overlooked. The key is not through the mind. The door is found through the heart. A conundrum to modern day greeks (remember the greeks who lived at the time of the Apostles and who could not understand the mystical teachings of Jesus). The danger of becoming sophisticated is that one will no longer "see" as a child and ultimately crack the code.

Part Two: The Esoteric Origins of Freemasonry, the Rosicrucians and the Lost Symbols Of Ancient Egypt

Other pages of interest at Reverse Spins: